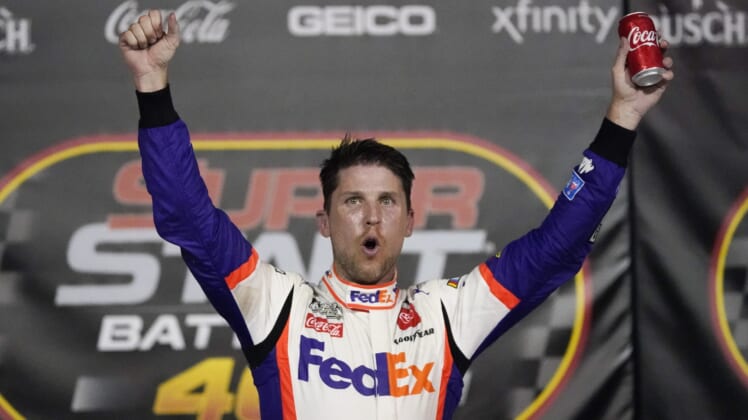 Joe Gibbs Racing goes into the 2021 season looking to improve upon a relatively poor season outside of Denny Hamlin, who captured seven wins during the 2020 season. There were many changes, not just drivers, for the organization during the offseason.

The biggest change for the team going into the season is Christopher Bell replacing now Richard Petty Motorsports driver Erik Jones in the No. 20 car. With a massive crew chief shuffle, Joe Gibbs Racing looks to rekindle success for Kyle Busch and further the development of Christopher Bell.

Here are four things to look for when it comes to Joe Gibbs Racing in 2021.

Denny Hamlin came up just short for the second straight year in the Championship 4 in his quest for a NASCAR Cup Series championship. Hamlin, 40, is now a team owner after buying Germain Racing’s charter and teaming up with Michael Jordan to field the No. 23 car for Bubba Wallace at 23XI Racing.

Hamlin has won 13 races in the last two seasons and was one of the favorites in both of the championship races. His responsibilities as a team owner should not be a hindrance in his quest of trying to have another successful season as he may be as hungry as ever.

Hamlin signed a multi-year deal with Joe Gibbs Racing that most likely ensures him as the driver of the No. 11 for his whole career, along with his sponsor FedEx. Hamlin will be paired with crew chief Chris Gabehart for the third straight season.

The 40-year-old driver goes into the 2021 season searching for that ever so elusive first Cup Series championship.

A crew chief change for Kyle Busch brings a new face to the No. 18

Kyle Busch’s struggles during the 2020 season were well documented as he almost went the whole season without a win. Busch, 35, comes into the 2021 season with momentum from his Texas Motor Speedway victory at the end of the year and a chip on his shoulder to prove his doubters wrong.

Busch has won two NASCAR Cup Series championships with crew chief Adam Stevens, but there will be a new face on top of his box this season. Ben Beshore will become Busch’s new crew chief as they look to replicate the success they had in the Xfinity Series in 2019 when they had four wins in seven races.

Having been the face of Joe Gibbs Racing ever since he entered the organization, Busch is considered to be one of the successful NASCAR drivers in the modern era and is the only Cup Series driver with multiple championships now that Jimmie Johnson has retired.

Busch goes into the 2021 looking to become a three-time champion and to give Beshore his first win in the Cup Series with Joe Gibbs Racing.

Martin Truex Jr. still has more left in the tank with NASCAR

Martin Truex Jr. struggled to secure wins after winning only one race at Martinsville in mid-June last season. Truex, 40, enters his third season with Joe Gibbs Racing and his second with crew chief James Small.

Truex still maintained his pace of top-5 and top-10 finishes last season, but his inability to win races was puzzling since he was running upfront. Many may question whether he still has enough in the tank to compete after failing to close out those wins last year as he nears the end of his career.

With his contract up at the end of the 2021 season, Truex could be in the final year of his NASCAR Cup Series career if he decides to retire. He still has the ability to win races and compete for a championship and his second full-time season with his crew chief could help create more consistency.

Truex goes into this season looking to re-gain his winning ways with Joe Gibbs Racing in his quest for another Cup Series championship.

Christopher Bell could begin his journey as NASCAR’s next superstar

Christopher Bell, one of Toyota’s highly touted prospects, has finally made his way to the mothership team after spending the 2020 season with former NASCAR team Leavine Family Racing. Bell, 26, will race in the No. 20 Toyota in his first season with Joe Gibbs Racing.

Bell will be paired with Kyle Busch’s former championship-winning crew chief Adam Stevens after spending the last two seasons with Jason Ratcliffe. The 26-year-old driver has been one of Toyota’s best young prospects after winning a Truck Series championship and producing at a high level in the Xfinity Series.

Just as I alluded to in my Hendrick Motorsports season preview, Bell could be in the same category as former Toyota driver William Byron. Both drivers could be on the verge of breakout years with eyes on multiple championships in their careers. Expectations may be high, but they may be warranted for a driver of Bell’s caliber.

Bell enters the 2021 season with high expectations as he looks to win his first career NASCAR Cup Series race.