Michael Jordan and Denny Hamlin join forces to start a new NASCAR Cup Series team in 2021, with Bubba Wallace as the driver. 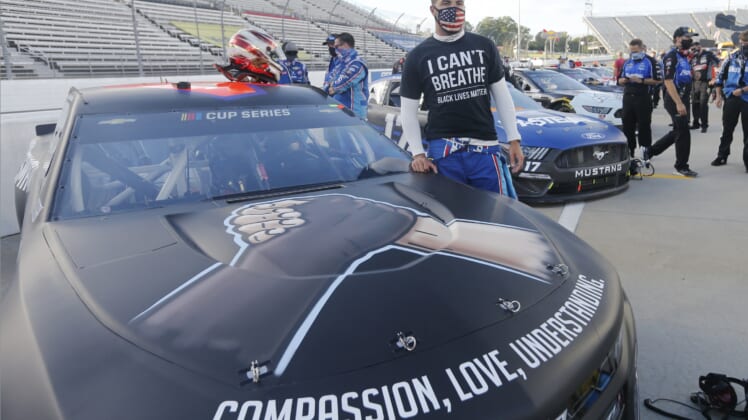 When you thought silly season couldn’t get any crazier, Michael Jordan and Denny Hamlin decided to send shockwaves through the sports world.

Michael Jordan and Denny Hamlin announced Monday night that the two will create a single-car NASCAR team for the 2021 season. Bubba Wallace confirmed he will be the driver.

Car number, manufacturer, official team name and sponsors will all be named at a later date.

What does this mean for Bubba Wallace’s future?

It was rumored a few days ago that Bubba Wallace was the front runner to land at Gaunt Brothers Racing. In this piece, Denny Hamlin plus other investors were rumored to back the team. It seems like Hamlin and Wallace have moved past their little dispute.

Gaunt Brothers Racing’s future is still to be determined. Hamlin and Jordan bought the Germain Racing No. 13 charter as Bob Germain confirmed his team’s future Monday night. The expectation is that this new team would be under the Toyota manufacture.

Wallace has been one of the biggest stories in silly season thus far. He has around $18 million of sponsorship to bring with him to the new team. The expectation is that Wallace’s new team will receive Furniture Row type support from when Martin Truex Jr. won the 2017 NASCAR Cup Series championship. If this is the case, Wallace is setting himself up for a successful future.

Jordan is typically viewed as one of the greatest basketball players to ever play in the NBA. His brand name goes far past what he has done on the court. Tying his name to NASCAR is extremely important.

It could possibly bring in new sponsors and fans that have never considered getting into NASCAR before. We all know Hamlin and Jordan are close. In fact, Hamlin runs his own iRacing team with a paint scheme in honor of Jordan.

This is one of the biggest moves we have seen in NASCAR since Dale Earnhardt Jr. moved to Hendrick Motorsports to replace Kyle Busch. They will be successful and maybe Jordan will be at the race track on a weekly basis. This would be great for the sport.

Jordan will be the majority owner while Hamlin is the minority owner. The 39-year-old Virginia native will continue to pilot the No. 11 Toyota Supra for Joe Gibbs Racing in 2021 and beyond.

When we look back five or 10 years from now, we will look at the 2020 NASCAR silly season as one of the most incredible offseasons to date. Michael Jordan, one of the greatest athletes ever, joining NASCAR is a huge step in the right direction.

NASCAR has been struggling with sponsors and trying to retain fans for what seems like a decade now. The fact that Jordan believes in this and wants to be successful, could draw new fans into the sport.

One of the most insane silly season rumors ever has come to light and it is magnificent. How does Michael Jordan Racing sound?