Chase Briscoe joins Stewart-Haas Racing in the No. 14 car for 2021

Chase Briscoe will replace Clint Bowyer at Stewart-Haas Racing in the No. 14 car for the 2021 NASCAR Cup Series season. 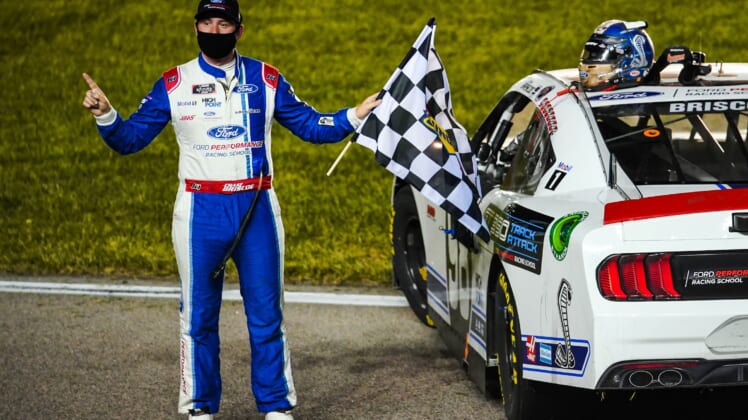 Chase Briscoe has been on a long journey in NASCAR to get where he is today. During the offseason, Briscoe said he needed eight wins to feel ready for next season’s NASCAR Cup Series. Following his most recent win at Kansas Speedway, the 25-year-old driver has found a ride for 2021.

Chase Briscoe will replace Clint Bowyer in the No. 14 car at Stewart-Haas Racing in 2021, per Motorsport.com’s Jim Utter. This comes after Bowyer announced he will move into the FOX Sports booth for the 2021 season, alongside Mike Joy and Jeff Gordon.

Briscoe currently has nine wins in the NASCAR Xfinity Series this season and has locked himself into the Championship Four.

What does Chase Briscoe bring to Stewart-Haas Racing?

Through his first three seasons in the NASCAR Xfinity Series, Chase Briscoe has 11 wins, 30 top-five finishes, and 50 top-10 finishes. He was not in the mix as much due to the “Big Three” in the series last year, but flourished when all three moved up.

The day Clint Bowyer retired, Briscoe was deemed the leading candidate for the No. 14 car at Stewart-Haas Racing. He has not raced at NASCAR’s top level yet. However, he might be the readiest driver for the NASCAR Cup Series we’ve seen in years.

Briscoe has been one of the most dominant NASCAR Xfinity Series drivers since Kyle Busch and Sam Ard raced in the series. If this is any glimpse of what the future brings, Briscoe will have a long and successful career in NASCAR.

Chase Briscoe has been one of the sport’s rising stars over this season. With nine wins, he is currently in a prime position to win his first NASCAR championship in the Xfinity Series.

Briscoe is ready for the NASCAR Cup Series and will join his former teammate Cole Custer at Stewart-Haas Racing next year. He will be a force to reckon with in the future and should represent the team well.

The 25-year-old Indiana native has been humble throughout his career. Some years, we didn’t know if he would be in a race car. Now, he has secured a ride and will be one of NASCAR’s faces for years to come.