The NASCAR season sees its first action on Tuesday with the Clash at Daytona for the Cup Series. Here's the full NASCAR schedule for Daytona speedweeks. 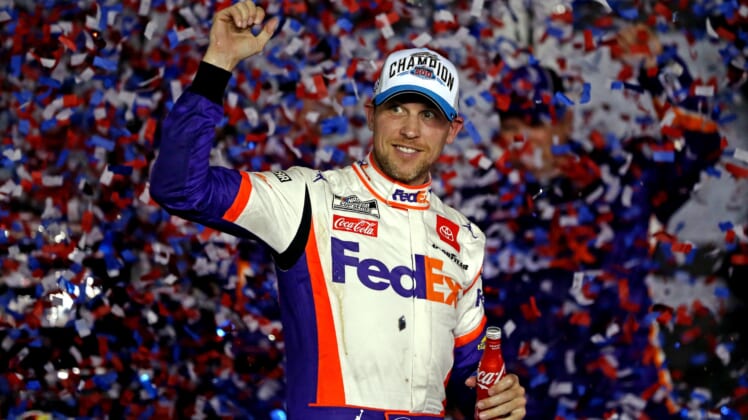 NASCAR schedule: The NASCAR season resumes on Tuesday as the Cup Series returns to racing with the Clash at Daytona. Due to a change made last season, all Daytona festivities will take place in one week instead of the normal two weeks that NASCAR has done for years now.

There are many changes going into this season, such as a new schedule and many new teams that entered the sport. One of the notable changes this offseason came with the move of Michael Jordan and Denny Hamlin, who made a new team in 23XI Racing, and Pitbull who is an owner at Trackhouse Team Racing.

Another big change is the Clash at Daytona, which will be run at the 3.61-mile road course instead of the 2.5-mile oval. The race will now be 35 laps and still have stages during the race. It’ll mark the first non-points or points paying race of the 2021 NASCAR season.

Check out the 2021 NASCAR schedule for this year’s Daytona speedweeks below.

The Cup Series has a busy week of action that will begin on Tuesday night with the Clash at Daytona. Ryan Blaney will start on the pole due to a random draw that took place on Monday night. There is a chance of rain and scattered thunderstorms, which will inevitably lead to issues with the schedule moving forward.

The Xfinity Series begins its action on Friday with their first practice of the 2021 season. All track time this weekend for the series comes with a chance of rain, so there could potentially be the possibility of their first track time of the year coming with the initial race itself. There will inevitably be changes to the schedule.

The Truck Series looks like they will have better luck when it comes to the weather this weekend. They should get practice in with ease if the forecast doesn’t change. This is one of the most exciting times of the year for NASCAR. However, the NASCAR schedule for speedweeks will most likely see some change as weather threatens the scheduled times.