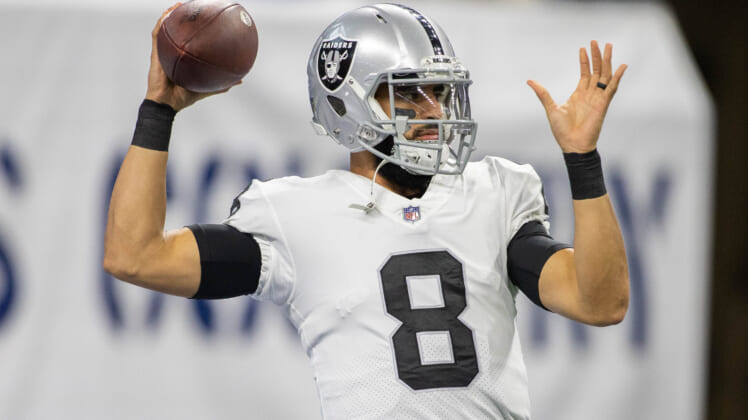 The Atlanta Falcons will have a new quarterback under center when the 2022 season comes calling. The team announced that it has signed Marcus Mariota to a two-year contract on Monday.

This deal comes immediately after Atlanta traded franchise stalwart Matt Ryan to the Indianapolis Colts in a blockbuster deal earlier on Monday.

By trading Ryan, the Falcons took on a whopping $40 million dead cap hit. It’s in this that they had no real financial avenue to pull off a trade for either Baker Mayfield of the Cleveland Browns or San Francisco 49ers quarerback Jimmy Garoppolo.

The No. 2 overall pick of the Titans back in 2015, Mariota and Falcons head coach Arthur Smith have a relationship with one another. Said relationship lasted five years in Nashville before Mariota opted to sign with the Las Vegas Raiders ahead of the 2020 season.

During this time, Smith surved as the Titans’ assistant tight ends coach, tight ends coach and offensive coordinator. In Mariota’s final season with Tennessee, he threw for 1,203 yards with seven touchdowns and two interceptions with Smith calling the plays.

Heralded coming out of Oregon back in 2015, Mariota’s tenure in Tennessee was defined by injury and inconsistent play. Ultimately, he lost his starting job to Ryan Tannehill back in 2019 before joining the Raiders.

The former Heisman winner’s best season came back in 2016 when he threw for 26 touchdowns against nine interceptions. Over the course of the past two seasons with Las Vegas, Mariota has attempted all of 30 passes.

For Atlanta, this is a move the team had to make after trading Ryan. Prior to signing Mariota, it had only Feleipe Franks rostered at quarterback. There’s still a good chance that the team will select a quarterback in the top 10 of the 2022 NFL Draft starting next month.