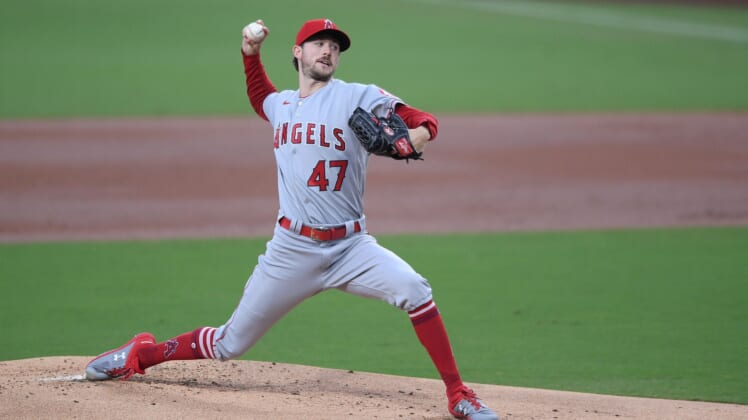 The Los Angeles Angels find themselves wondering whether they have the starting pitching to compete for the American League West crown. The answer? Yes, as long as Griffin Canning blossoms into an ace.

Canning has a consistent four-pitch arsenal (fastball, curveball, slider and changeup). With said arsenal, the 24-year-old has gradually improved during his time with the Angels. The issue has been keeping runners off the basepaths (1.28 WHIP) and working deep into games to help save the team’s bullpen.

The right-hander has to finish off hitters. The more Canning labors or gives up considerable contact, the more trouble he puts the Angels in. While he typically avoids mid-game catastrophes, high pitch counts force manager Joe Maddon’s hand with the bullpen and a historically mediocre rotation, comparatively speaking.

Let’s dive into how Canning’s potential growth in 2021 can determine where the Los Angeles Angels finish in the AL West.

The Angels do have some reliable starters with Dylan Bundy and offseason acquisitions Jose Quintana and Alex Cobb in place.

Bundy is coming off a career year with the Angels where he posted a 3.29 ERA and a 1.04 WHIP across 11 starts. Quintana provides length even if he struggles to limit the run damage. When healthy, Cobb is a reliable veteran.

At the same time, none of the aforementioned pitchers are sure things. Bundy’s stellar 2020 campaign was the first time in his career that he put together a season anywhere near that stratosphere. Quintana has produced to the level of a middle-to-top-of-the-rotation starter over the last four seasons. Cobb has been inconsistent and has endured a handful of injuries over the last five years.

Meanwhile, arms like Andrew Heaney, Jaime Barria, and Patrick Sandoval are either inconsistent or haven’t taken that huge step forward in their respective careers.

This is a middle-of-the-pack rotation with Bundy performing to 90% of the level he did last season and the rest of their rotation performing to their recent tendencies. If Canning becomes this team’s ace, it makes life easier for everyone else and elevates this rotation.

Griffin Canning has the upside to become an ace

If Canning makes marginal improvements, it won’t have a profound impact on the Angels in the short term. On the other hand, if he takes a monumental step forward, good enough to merit All-Star Game consideration, it gives this rotation a backbone and helps Maddon.

A rotation pillar gives the Angels someone to give the ball to with confidence in a crucial postseason game. Canning getting hitters to wave at his off-speed pitches, keeping more runners off the basepaths and pitching deep into games gives the Angels the ace they’ve been in dire need of.

Furthermore, Canning is 24: he should improve. All that said, how does a mere starter growing into an ace significantly change the Angels’ 2021 fortunes?

The AL West is within reach for the Los Angeles Angels

The AL West can be had. Yes, the Oakland Athletics are the best team in the division from a health and talent standpoint. Concurrently, their offensive attack is too boom-or-bust, they’ve lost significant players to free agency (Marcus Semien, Liam Hendriks and Robbie Grossman) and have a young pitching staff that took a step back last season.

One could argue that the A’s winning the AL West last season was them benefiting from the underwhelming divisional competition (divisional play made up two-thirds of the 2020 regular season). The Houston Astros played .500 baseball in the regular season before beating the A’s in the ALDS while the Seattle Mariners are rebuilding and the Texas Rangers attempt to gut their way out of MLB stagnation.

A stout Canning and respectable versions of those alongside him in the rotation are now attempting to get the ball to hard-throwing reliever and one of the best closers in MLB in Raisel Iglesias, who general manager Perry Minasian acquired from the Cincinnati Reds in December.

Their pitching staff is accompanied by a depth chart that includes the likes of Mike Trout, Anthony Rendon, David Fletcher, Jared Walsh, Albert Pujols, Justin Upton, Jo Adell and a healthy Shohei Ohtani. This should be an elite offensive attack.

No moves that Minasian made this offseason are substantially moving the needle for the Los Angeles Angels. Them finally doing something with the premier talent they have around the diamond is a matter of players from within finding another gear and/or performing to their potential. Griffin Canning is prime candidate number one.