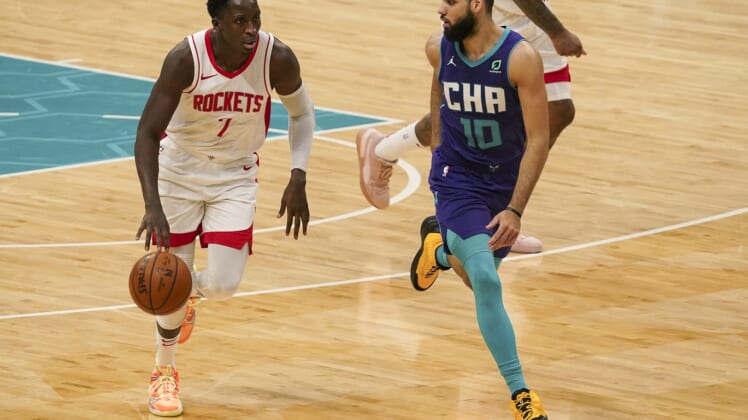 The Big Apple is once again becoming the talk of the NBA. Fresh off New York Knicks rumors suggesting that an active trade deadline could be the name of the game, team president Leon Rose dealt for MVP Derrick Rose.

Meanwhile, the Brooklyn Nets have just formed the most-recent super team by trading for fellow former MVP James Harden. We already know that the Knicks feel like the stepchild in New York. It’s one of the reasons a former player-agent in Rose was brought in to head the front office.

Even after acquiring Rose, it doesn’t appear that the surprising Knicks are done looking to pull off impactful trades. Both Austin Rivers and Elfrid Payton could be swapped for assets. In terms of whether New York is attempting to add to its core, we’re hearing some more interesting stuff on that front.

“I would believe those rumblings. I think they were monitoring him in the offseason,” ESPN’s Zach Lowe noted in relation to the Knicks reported interest in Oladipo.

Acquired in the James Harden blockbuster earlier this season, Oladipo is on an expiring contract. It’s his first full season back in action since the former All-Star suffered a horrific knee injury back in 2018-19.

After struggling in the Orlando bubble last summer and fall, Oladipo has seemingly returned to form with the Rockets. He’s averaging 19.6 points, 4.9 rebounds and 5.2 assists in 10 games for Houston. Unfortunately, his shooting numbers are down. Oladipo is hitting on a mere 39% from the field and under 30% from distance.

Despite this, rumors suggesting interest in his services could make some sense. It would give the team an ability to get a first-hand look at the impending free agent over the next few months. With a ton of cap room to utilize, Rose and Co. could also potentially acquire him on the cheap en route to helping Houston save money.

More than anything, Oladipo was a salary throw-in when it came to the Harden trade. Sure the Rockets might consider re-signing him, but it seems like they are going into somewhat of a retooling process after trading Harden and Russell Westbrook over the past few months. We also know that Rockets owner Tilman Fertitta is in cost-cutting mode right now.

How might a Victor Oladipo trade to the Knicks work?

Even after acquiring Rose, New York finds itself $17 million under the NBA salary cap. The team could pick up his contract without the Rockets being forced to take on Julius Randle’s deal, something the Knicks likely wouldn’t want to happen in the first place given how good Randle has played this season (more on that below).

Potentially moving the 2021 first-round pick they acquired in the Kristaps Porzingis trade with the Dallas Mavericks could act as a centerpiece if the Knicks were to make a move for Oladipo. From there, former lottery pick Kevin Knox and a future second-round pick as well as cap fillers could be enough for Houston to pull the trigger.

We covered Randle a bit above. Teams are going to show interest in the veteran forward would the Knicks fall out of playoff contention. Despite some recent struggles, that’s not going to happen soon. New York sits at 11-15 and would be taking part in a play-in-tournament if the season ended today.

For his part, the 26-year-old Randle has been special thus far this season. He’s averaging 22.3 points, 10.9 rebounds and 5.7 assists on 48% shooting from the field. Given his young age and the fact that the former first-round pick is set to count a mere $19.8 million against the cap in 2021-22, there’s no reason for the Knicks to move him. If they do, it will be for major draft compensation and/or a talented young player.

It was also previously noted that the Knicks were interested in star Chicago Bulls wing Zach LaVine. However, that would cost a lot more in terms of compensation than bringing in Oladipo.

Instead, it makes sense that New York would want to buy low on Oladipo while moving both Rivers and Payton in order to restore some draft assets.