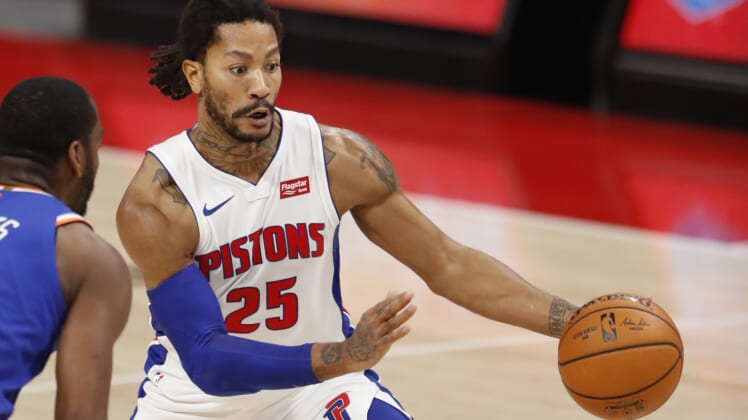 The Detroit Pistons are closing in on a trade sending Derrick Rose to the New York Knicks, a deal that will reunite the 32-year-old with his former team and coach.

NBA rumors started leaking on Saturday night that Rose and the Pistons were prepared to part ways. The 2011 NBA MVP and three-time All-Star guard last played for Detroit on Jan. 30. Since then, he has been held out of action as the organization explored its trade market options. While multiple teams inquired, the Knicks have got it done.

According to The Athletic’s James Edwards III and Shams Charania, the Knicks and Pistons are nearing an agreement on a deal. While the move isn’t official, Detroit is expected to receive Dennis Smith Jr. and draft-pick compensation in exchange for Rose’s expiring contract.

It will be a reunion for Rose and Thibodeau. The pair worked together with the Chicago Bulls from 2010-’15. Across their five seasons together, the Bulls reached the 2011 Eastern Conference Finals and enjoyed five consecutive playoff appearances. Rose made the All-Star team in three straight seasons and earned NBA MVP in a phenomenal 2011 campaign that saw him average 25 points, 7.7 assists and 4.1 rebounds per game.

He was a hot candidate at the NBA trade deadline last season, generating significant interest from the Los Angeles Clippers and Los Angeles Lakers. Ultimately, Detroit opted to keep him for the remainder of the year. After averaging 18.1 points and 5.6 assists per contest in 2020, he has taken a step back in his age-32 season.

Rose has played in 15 games this season, coming off the bench in every appearance. Before being held out by the Pistons, he was averaging 14.2 points, 4.2 assists and 1.2 steals per game. While his stats appear decent, given he averaged 23 minutes per contest, he only shot 42.9% from the field and averaged nearly two turnovers each night. He is under contract for $7.68 million and will become a free agent in the offseason.

The arrival of Derrick Rose isn’t great news for Immanuel Quickley. After falling to the No. 25 pick in the 2020 NBA Draft, the Kentucky guard has been one of the best rookies in the NBA this season. Despite seeing limited minutes, he averages 12.4 points and 2.7 assists per contest, with his on-court time often fluctuating from 13 minutes to 30 depending on the day.

Detroit is certainly satisfied getting a return for Rose, but they clearly lost value by holding on to him last season. With that said, a fresh start could help Dennis Smith Jr. turn things around. Once the No. 9 overall pick in the 2017 NBA Draft, Smith Jr. volunteered for the G-League to get more minutes.

With Killian Hayes out indefinitely and Rose is gone, there will be minutes for the taking in the Pistons’ rotation. It’s unlikely we see the version of Smith Jr. who averaged 15.2 points and 5.2 assists as a rookie with the Dallas Mavericks, but he is more valuable long-term to Detroit than Rose.

Specifics on the draft compensation headed to the Pistons haven’t been disclosed. But the Knicks have multiple 2021 second-round picks and future second-round selections in the 2023 and 2024 NBA Draft.