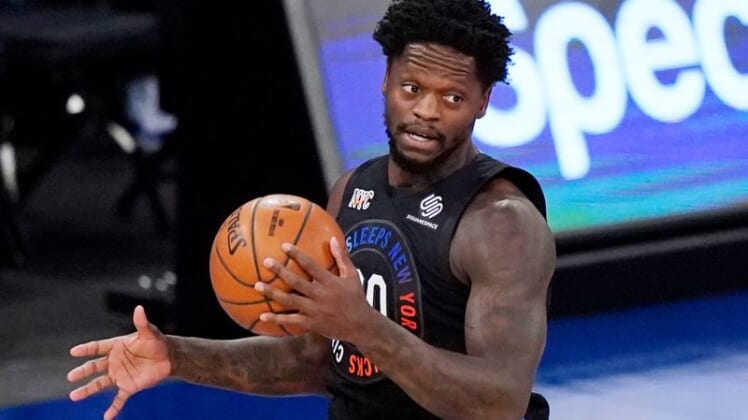 At 9-13 on the season and just one game out of the final playoff spot back east, NBA rumors have suggested that the New York Knicks could be buyers ahead of the March 25 deadline.

It’s been a surprising start to the season under first-year head coach Tom Thibodeau. In fact, New York did not win its ninth game until the team’s 33 try a season ago.

One of the major reasons for the Knicks’ success has been the play of veteran forward Julius Randle. Taking on a leading role for the first time in his career, the former Los Angeles Lakers top-10 pick is averaging 22.4 points, 11.1 rebounds and 6.0 assists on 47% shooting from the field.

It would not be an exaggeration to say that Randle is playing at an All-Star level. That has now led to NBA rumors suggesting Randle could be moved ahead of the March 25 trade deadline.

“Two league officials believe Randle’s strong play on such a team-friendly contract will draw interest from teams looking to add a scoring big ahead of the March 25 trade deadline. However, those same officials believe at this point New York is more interested in being a buyer by adding another high-impact player to pair with Randle,” Bleacher Report’s A. Sherrod Blakely reported on Wednesday.

It stands to reason that teams would be interested in the 26-tear-old forward. Randle should draw a nice amount of play should New York put him on the trade block. Randle is set to count a mere $19.8 Million against the cap in 2021-22, the final year of his deal. Any team that acquires the talented forward can also opt out of said deal should things not pan out.

On the other hand, Knicks president Leon Rose might very well decide that Randle is an important part of their future. We already know that Rose has been looking for star power in his short tenure in that role. What if he already has a true star on the roster?

NBA rumors will continue to link the Knicks to trades

Recently, New York has been bandied about as a potential trade partner for struggling Pelicans guard Lonzo Ball. The team has also been linked to high-scoring Chicago Bulls wing Zach LaVine.

At this point, it seems like the Knicks are going to be buyers ahead of the NBA trade deadline. Add in the report we linked above from A. Sherrod Blakely, and that’s magnified further.

If the Knicks do indeed look to trade Randle, it will not be for pennies on the dollar.

“When you look at how Julius has transformed his game and the fact that New York is winning more than usual, you gotta at least have him in the conversation when you’re talking about the Most Improved Player in the league this season,” one Eastern Conference scout said.

That sounds like someone who could net a whole heck of a lot in return. Right now, Rose and Co. have to weigh the short-term implications of potential bottom-end playoff contention in 2020-21 with the longer-term goal of becoming a conference powerhouse. What they decide with Randle will play a huge role in this.