Could New York Knicks President blow the team up this fall? 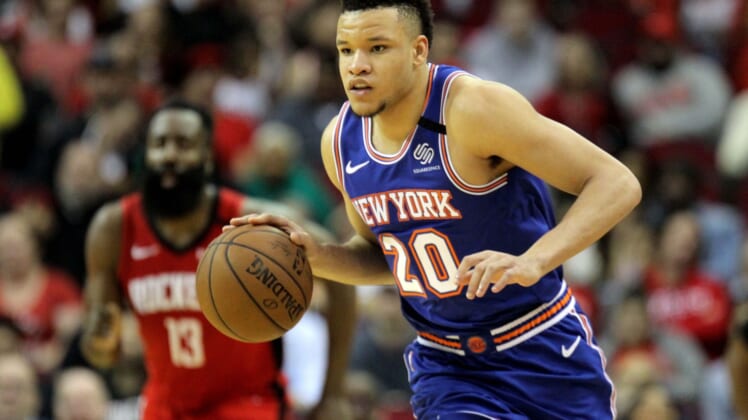 The New York Knicks’ 2019-20 season ended prematurely back on March 11 after the team posted a 21-45 record. This represented New York’s seventh consecutive losing season since Mike Woodson led it to a 55-win campaign back in 2012-13.

The firing of president Steve Mills earlier in the season indicated just how serious New York’s brass is about moving on to a new era. Sure there’s concern here due to James Dolan’s status as one of the worst owners in pro sports. But the hiring of former player-agent Leon Rose as the team’s president could change the dynamic here.

New York has gone away from the model of bringing in front office personnel to run the ship. It has now joined other organizations in going this route, the most-successful example being the Golden State Warriors hiring former agent Bob Myers as general manager years back.

Leon Rose changes the dynamic in a big way

The former player-agent had in the past represented the likes of LeBron James and Allen Iverson. He has a built-in relationship with the player community. That is no small thing.

It could also lead to widespread changes once the truncated 2019-20 NBA campaign comes to an end and the offseason starts.

A recent report from Marc Berman of the NY Post suggests that Rose is not sold on 2018 lottery pick Kevin Knox, who has played less than two seasons in the Big Apple. Rose wanted to see how the forward would perform down the stretch run, but the season being suspended due to the ongoing pandemic changed the dynamics here.

As a rookie back in 2018-19, Knox averaged 12.8 points and 4.5 rebounds. He took a major step back during his sophomore campaign. The former No. 9 overall pick averaged a hair over six points on 36% shooting from the field.

Former lottery pick Frank Ntilikina could be on his way out, too.

In addition to Knox, there’s a strong chance that Rose could decide to move on from 2017 lottery pick Frank Ntilikina. The Belgium native was bandied about as trade bait with Mills leading the charge. He, too, averaged just over six points this past season and continues to struggle on the offensive end of the court.

There’s now a good chance that Rose decides to move on from both Knox and Ntilikina. While the latter wouldn’t bring much back in a trade, Knox could be packaged with a big-time contract for someone to help New York expedite its rebuild to an extent.

New York is in a decent position under Rose in that he has no built-in relationship with players currently on the team. The new president also has some decent assets to help improve the Knicks’ standing, both short and long term.

It would be an absolute shock if New York didn’t trade last summer’s top free-agent acquisition in that of Julius Randle. At 25 years old, the forward was able to average nearly 20 points in his first season with the Knicks. Randle’s average salary of $18 million annually makes him an attractive option for other teams.

To a lesser extent, veterans Taj Gibson and Elfrid Payton might be attractive to other teams in smaller deals. The two have proven their worth as solid rotational options. Though, they do very little when it comes to Rose’s hopes of building this team from the ground up.

The 2020 NBA Draft will be interesting for the Knicks

New York has one key building block in that last year’s lottery pick R.J. Barrett. Rose fully understands that there’s not much more on the roster to build with moving forward.

Enter into the equation a likely top-five pick in what promises to be a weak 2020 NBA Draft. Could Rose and Co. look to package that pick with Knox and potentially Randle to acquire a true star player? Stranger things have indeed happened.

There’s every reason to believe that Rose is going to blow this entire thing up in the Big Apple. Even a truncated offseason due to the ongoing pandemic won’t change this.

Expect the biggest NBA team within North America’s largest media market to make waves once the 2019-20 season finally comes to a conclusion.