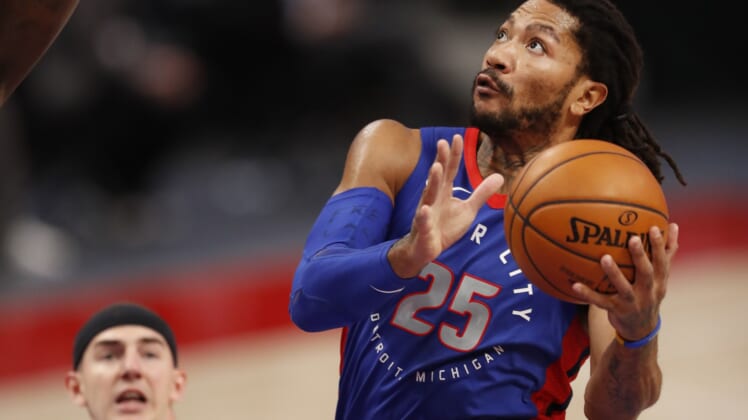 It’s been noted over the past several days that the New York Knicks would be buyers ahead of next month’s NBA trade deadline. Pulling off a Derrick Rose trade on Sunday is the most-recent example of this.

New York reportedly acquired the former NBA MVP from the Detroit Pistons in exchange for Dennis Smith Jr. and draft pick compensation. At this point, suggestions are that Detroit will receive multiple second-round picks as part of the package.

For a surprising Knicks team that entered Sunday’s action with an 11-13 record and as the seventh seed in the Eastern Conference, this is a pretty big move.

As for the league-worst Pistons, this could free up more playing time for youngsters as the team continues with what’s expected to be a long-term rebuild. Here are the biggest winners and losers from the blockbuster Derrick Rose trade to the New York Knicks.

For the 32-year-old Rose, this represents a reunion of sorts. He starred under Knicks head coach Tom Thibodeau with the Chicago Bulls from 2010-15, earning an MVP award in the process. Rose then resurrected his career after multiple injury-plagued seasons under Thibodeau with the Minnesota Timberwolves.

Not only that, the veteran point guard now enters playoff contention after existing without much of a chance of contention in Detroit over the past season-plus. Set to hit free agency, this is Rose’s chance to prove that he can be a starter-caliber point guard on a contending team.

This rookie first-round pick has been turning heads in the Big Apple thus far this season. The Kentucky product entered Sunday’s action having averaged 16.3 points and 3.3 assists on 45% shooting from the field over the past dozen games. He’s also averaging north of 21 minutes per game during that span.

Now that the Knicks have two veteran point guards in Rose and Elfrid Payton, it’s hard to see Quickley’s minutes increasing much moving forward. Specifically, Rose is going to demand a higher share of the minutes compared to Dennis Smith Jr. That’s not great for the young guard.

Once seen as an up-and-comer with the Dallas Mavericks, Smith Jr. fell out of favor under Thibodeau in New York. In fact, the former first-round pick wasn’t even in the Knicks’ rotation at the time of Sunday’s blockbuster trade. He had played in all of three games this season.

Now on a rebuilding Pistons team, there’s a chance that Smith Jr. will see an uptick in minutes. That’s primarily true with rookie first-round pick Killian Hayes currently sidelined to injury. Even if the Pistons were to move on from Smith Jr., he’d find a better situation than what the guard has existed in thus far this season.

Los Angeles was among the many teams bandied about in a potential Derrick Rose trade. It makes sense in that the Clippers have been looking for an upgrade at point guard for some time now. Remember, both Patrick Beverley and Lou Williams were talked about as trade chips leading up to the start of the 2020-21 season.

We already know that Los Angeles lacks draft pick assets stemming from the trades for both Paul George and Marcus Morris. Even then, the return Detroit received for Rose suggests that the Clippers could have made a play for him. Instead, the Clippers are now back to the drawing board at point guard with seven weeks until the NBA trade deadline.