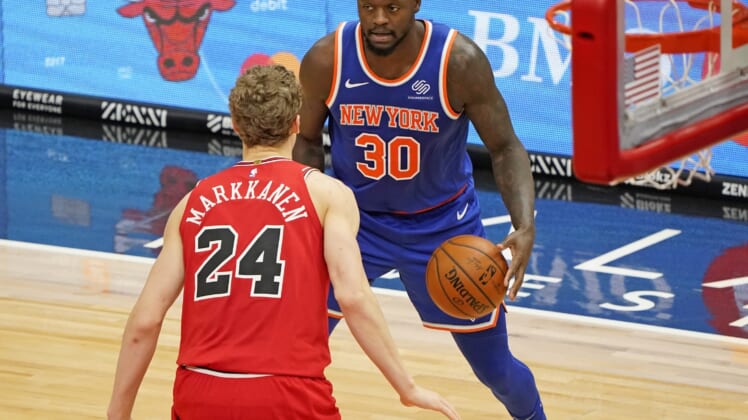 The New York Knicks rumor mill is already buzzing about potential targets at the NBA trade deadline. While there remains plenty of focus on a blockbuster deal, the Knicks could already have their eye on a top free agent next offseason.

While the NBA trade deadline isn’t until March 25, the Knicks have already been connected to several marquee players on the trade market. Among them, New Orleans Pelicans guard Lonzo Ball and Chicago Bulls star Zach LaVine. But LaVine isn’t the only player who head coach Tom Thibodeau may be targeting as part of the team’s long-term core.

New York Knicks rumors: Lauri Markkanen could be a key free-agent target in 2021

Thanks to a flurry of moves in recent years, the Knicks will enter the 2021 NBA offseason with just $54.9 million owed in player salaries. The figure could drop even lower if the team trades Julius Randle, set to make $19.8 million next season, who is attracting significant interest across the league.

While NBA free agency is months away, Los Angeles Clippers star Kawhi Leonard will be the top player available. After that, there is a significant drop-off, with Chris Paul, DeMar DeRozan and Victor Oladipo among the top options that all carry some health concerns. But the Bulls could have another target in mind.

Joe Cowley of The Chicago Sun-Times recently hinted that Bulls forward Lauri Markkanen could be one of New York’s top targets. While he will be a restricted free agent, allowing Chicago to match any offer he receives, New York is among the teams that could put a big contract on the table.

Knicks rumors: Lonzo Ball could be a target ahead of NBA trade deadline

Thibodeau has long been a fan of the stretch four’s game. He even admitted that, if not for the Jimmy Butler trade, the Minnesota Timberwolves would have selected Markkanen with the No. 7 overall pick.

The 23-year-old’s career in Chicago has experienced some rough moments. Injuries sidelined him at times during the 2018-’19 and 2019-’20 seasons. However, under head coach Billy Donavan, we’ve seen a massive turnaround from the 7-foot forward.

He is shooting a career-best 51.1% from the field and hitting nearly 40% of his shots beyond the arc, sinking 2.9 three-pointers per contest. The improved shooting has led to him averaging a career-high 19.6 points per game.

If the interest in Markkanen is genuine, it could further signal plans to trade Randle before the deadline or early in the offseason. Now would be a great time to sell high on the 26-year-old power forward, so expect there to be even more Knicks rumors around the All-Star candidate.