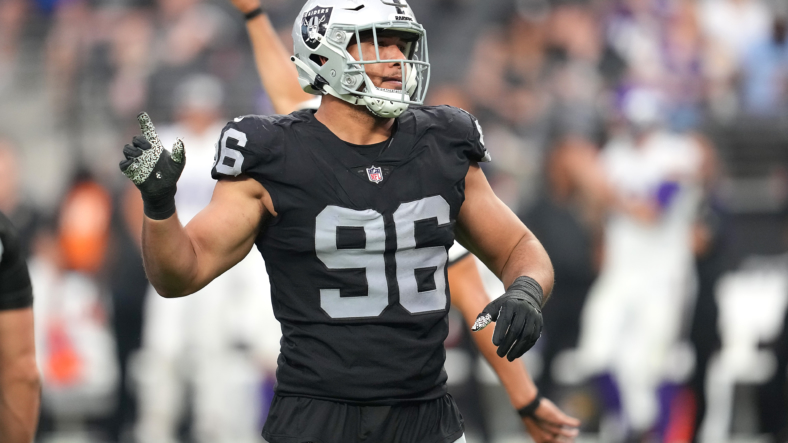 The Raiders, who faced a New England Patriots team that had been in Las Vegas for joint practices with the Silver and Black, were able to pull out a 23-6 victory. With the win, it gave the team’s first undefeated preseason in franchise history with a perfect 4-0 record.

“I’m obviously very appreciative of the guys’ efforts tonight and what they did this week,” Las Vegas Raiders head coach Josh McDaniels said after the game.

1. Las Vegas Raiders finally get some takeaways (and take advantage)

One of the biggest differences between Friday’s preseason game and the previous three matchups was the number of turnovers in a 60-minute stretch.

The Raiders had not one, not two, but three turnovers recovered by the defense. Furthermore, some of these takeaways came against the Patriots starters, including quarterback Mac Jones.

On top of that, the Raiders were able to capitalize on the turnovers. Las Vegas scored both of its touchdowns following interceptions.

Taking advantage of turnovers is key for any team during the season, as those 14 points changed not only the outcome of the game but also the momentum inside their home stadium.

One of the team’s two interceptions came from a player who was not expected to be playing safety.

This player was not even listed on the roster as a safety.

With 6:38 left in the game, wide receiver Isaiah Zuber was in the game and caught a pass – for an interception.

McDaniels said Zuber was ready to play defensively after a meeting the day before while also taking note of the other roles he has done this preseason.

“We kind of got short there in the secondary towards the end,” McDaniels said. “We had a couple guys cramping I think it was. We mentioned something to Isaiah yesterday about it. We walked through a few things for him to be able to help us in case that situation came up. It did. He was ready to go and he made a great play.

“He’s also running down on the kickoff after we scored and covering punts. I commend him for being ready to go.”

Being able to grow that versatility is going to be key, especially for a guy near the bottom of the roster, and the team has to cut 27 players by Tuesday.

The first-year Raiders’ coach said Zuber coming in is a small description of what the preseason has been for the Silver and Black.

“And that’s a great example of what our team has become: unselfish, willing to do whatever is asked of them,” McDaniels said.

Having Zuber appear in a game when situations like this happen tells you how much not only he, but others are buying into the new system.

3. Undrafted free agents making a push for the 53-man roster

Throughout the Raiders roster, guys have continued to buy in, including those who are trying not to get cut.

Those players who continue to make those decisions tougher for McDaniels and general manager Dave Ziegler are a trio of undrafted free agents in cornerback Sam Webb and linebackers Luke Masterson and Darien Butler.

When it comes to making these decisions before Tuesday, the mentality for Ziegler and McDaniels will be to try and figure out which players will make the practice squad without getting picked up by another team.

In addition to his six tackles, Masterson also recorded the team’s first interception of the game after Jones was surveying the field.

With four other Raiders around him compared to just one Patriots player, Jones threw the ball right into the hands of Masterson and returned it into Patriots territory to set up a favorable field position.

4. Tashawn Bower making the most of his opportunities

One of the position battles that is completely focused on depth is at the defensive end position behind the duo of Maxx Crosby and Chandler Jones.

Not only did edge rusher Malcolm Koonce make his presence known against New England, but so did Tashawn Bower.

Bower, who signed as an unrestricted free agent last April, recorded five solo tackles and two sacks, as well as a tackle for loss.

With his two sacks tonight, Bower recorded four sacks this preseason, which is more than any other Raider in the past 12 years, with Kamerion Wimbley accomplishing that total in 2010.

Furthermore, one of Bower’s two sacks was a strip-sack late in the second quarter to stop the Patriots from building any last bit of momentum before the half.

Bower is another name to watch to see if he makes the 53-man roster on Tuesday.

One thing that may go unnoticed during the preseason is the production of a kicker after a strong season the year before.

Daniel Carlson, who was named a 2nd team AP All-Pro kicker last year, only continues to remain consistent this preseason.

Carlson was perfect once again on Friday, making field goals from 23, 50, and 33 yards out. During the preseason, he scored a league-high 33 points and was flawless in his field goals, yet he did miss one point-after attempt in Week 1 against the Vikings.

Now, the Las Vegas Raiders have to cut 27 players before Tuesday’s deadline to reach 53 players before preparing for their first matchup of the 2022 season on Sept. 11 against the Los Angeles Chargers at SoFi Stadium.