Las Vegas Raiders special teams looking to be perfect in 2022 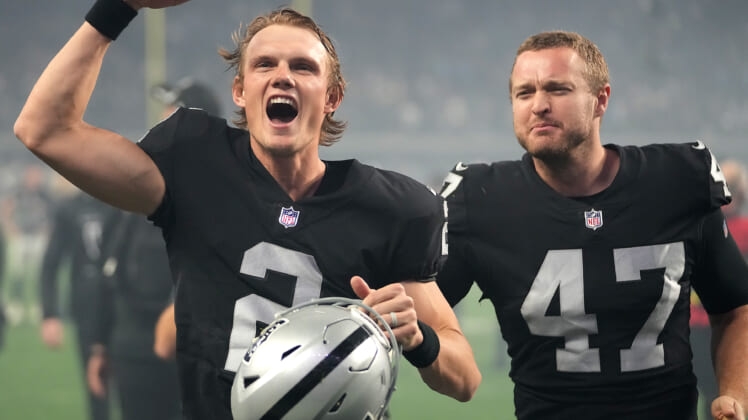 However, you can’t forget the Raiders’ trio of specialists in punter A.J. Cole, placekicker Daniel Carlson and long snapper Trent Sieg, who all three signed contract extensions last year – Sieg in March and Cole and Carlson in December – that last at least until the 2023 season.

Sieg and Carlson have been in the Silver and Black since 2018 while Cole joined the duo the following season.

Although Sieg was out for the first three months of 2021 with an ankle injury and sidelined on the team’s COVID-19 list, Carlson and Cole went on to have successful seasons of their own.

Cole was a first-team All-Pro punter and played in his first Pro Bowl earlier this year.

Carlson led NFL in field goal makes and attempts, hitting on 40-of-43 field goals and had five game-winners with his foot that helped him receive second team All-Pro honors.

With the accomplishments of both Cole and Carlson last season, they are now looking to take it the next level and aim for perfection.

In training camp, Cole said the trio is focused on making every field goal, punt and snap count, no matter what has happened previously.

Offseason work for A.J. Cole and Daniel Carlson have been refining and expanding

The 26-year-old Cole, who averaged a league best 50 yards per punt last year, has been working on kicking balls to certain spots — primarily between the numbers and the sideline.

By working on this aspect during the offseason, Cole is elevating and expanding his game in order to challenge returners when those situations arise.

Carlson said his individual goals vary from season to season but strives to do the best he can no matter when the field goal opportunity takes place.

“Every year during camp, I write my own goals and some of that may be based on ‘hey, I want to improve on this from last year,’” Carlson said. “Each year is a new year and I have to continue to prove myself. It’s more about proving it to myself and just competing with myself. I’m never going to be perfect but I’m going to try and get as close as I can to that each day when I practice or when I play in a game.

The wrinkle for the Las Vegas Raiders specialist: A new special teams coordinator

One of the new changes for the Las Vegas Raiders specialists is a new special teams coordinator in Tom McMahon, who has spent the last four years coaching against the Raiders for AFC West foe, the Denver Broncos.

In total, McMahon has spent the last 15 years coaching special teams across four NFL franchises. Before joining the Broncos in 2018, McMahon spent four years in Indianapolis, one season in Kansas City and three years in St. Louis, before the Rams moved to Los Angeles.

As the relationships continue to build in training camp between McMahon and the specialists, he wants steadiness from the feet of both Cole and Carlson, similar to the way Stephen Curry shoots a basketball from beyond the arc.

“From a coaching standpoint, the way I‘m approaching this is consistency,” McMahon said. “We want the same ball all the time by both of them because if they hit that same ball, that’s perfection. It’s no different than a three-point shooter. He makes all his threes. He shoots it the same. We want the same exact ball and that’s really what we’re shooting for.”

From a player’s perspective, both Carlson and Cole understand there is an adjustment period after having former Las Vegas Raiders special teams coordinator Rich Bisaccia for most of their careers.

The theme for the specialists has been staying in the present, whether it is through their kicking practices or whoever is coaching them.

The experience from both sides will expedite some of the relationship adjustments as it will benefit the team moving forward.

“Coming in, I’ll be honest with you, it’s nice to have that accountability from a production standpoint,” McMahon said. “They’ve been accountable to the Raiders with their production. That hasn’t changed in just our working together. They want their charts to look perfect. They want everything that they do to be winning because the other guys around them are going to count on them to do their job.”