Ever since Kevin Durant requested a trade from the Brooklyn Nets back on June 30, the Phoenix Suns have come up as a top landing spot for the two-time NBA Finals MVP.

Phoenix is said to be one of two preferred landing spots for Durant, joining the Miami Heat in that exclusive list.

One name being brought up as a necessity heading to Brooklyn in a hypothetical Durant trade is restricted free agent Deandre Ayton. Phoenix would have a hard time making the finances work short of including Ayton in a sign-and-trade.

That’s no longer a possibility following Thursday’s blockbuster NBA news that Ayton has signed a four-year, $133 million offer sheet with the Indiana Pacers.

While not impossible to pull off a Durant trade without Ayton being involved, there’s a lot of hurdles for the Suns right now.

There’s still a minimal scenario in place that suggests the Suns can work out a Kevin Durant trade without Ayton being involved. That would include Mikal Bridges and Cameron Johnson heading to Brooklyn as centerpieces.

From there, the Suns would have to move off Jae Crowder and Landry Shamet to make the salaries work while offering up a massive haul of first-round picks. Given Brooklyn’s disappointment with the Suns’ previous offer for Durant, this seems highly unlikely.

This seems to suggest that the number of teams realistically capable of acquiring Durant in a blockbuster trade has narrowed. That’s magnified by the Toronto Raptors refusal to offer up reigning NBA Rookie of the Year Scottie Barnes.

ESPN’s Adrian Wojnarowski reported that Miami has been among the most aggressive teams in pursuing a Durant trade.

Miami has yet to offer up star center Bam Adebayo in trade talks with Brooklyn. Adebayo also couldn’t head to the Nets in a two-team swap due to NBA rules prohibiting teams from having two rookie-level max players on their roster that they didn’t originally draft.

Any package sending Durant to the Heat would involve Duncan Robinson and Tyler Herro heading out. Kyle Lowry would also have to be included for financial reasons. Unfortunately, Miami only has two first-round picks to offer up in a trade for KD. Given Brooklyn’s otherworldly asking price, this might not be enough to get it done. 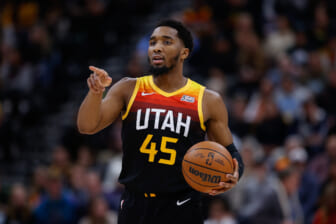 Also Read:
Miami Heat should jump into Donovan Mitchell chase: How a trade might look

Obviously, the Heat could find a way to get a third team involved. If they’re able to finagle multiple first-round picks from another squad for Herro, Pat Riley and Co. would be in business.

As for the Golden State Warriors, it’s beyond complicated. On the surface, it makes no real sense for Golden State to be interested in their former star forward. They just won the title this past season without him and have a growing young core group of players who could be the face of the franchise once the big three call it quits.

Would general manager Bob Myers and Co. really be willing to offer up the likes of All-Star Andrew Wiggins, Jonathan Kuminga, Jordan Poole, James Wiseman, Moses Moody and multiple first-round picks for Kevin Durant? We’re not too sure.

What we do know is that Stephen Curry has been recruiting Durant back to the Bay Area. He’s joined the likes of Klay Thompson and Draymond Green in having conversations with KD about a reunion. Meanwhile, Golden State’s brass has had internal talks about bringing Durant back.

Sure there’s other contending teams that could get involved here. But for now, the market seems to be extremely limited given Brooklyn’s asking price and the offers that they have received.

ESPN’s Brian Windhorst reported recently that the Nets’ decision-makers have been “turned off” by trade offers made for Durant. The same report indicates that Brooklyn is demanding a king’s ransom for KD. Said demands have likely outpaced the four first-round picks and five players the Minnesota Timberwolves gave up to acquire Rudy Gobert from Utah.

What does this all mean? Don’t expect a resolution to the entire Kevin Durant drama any time soon.