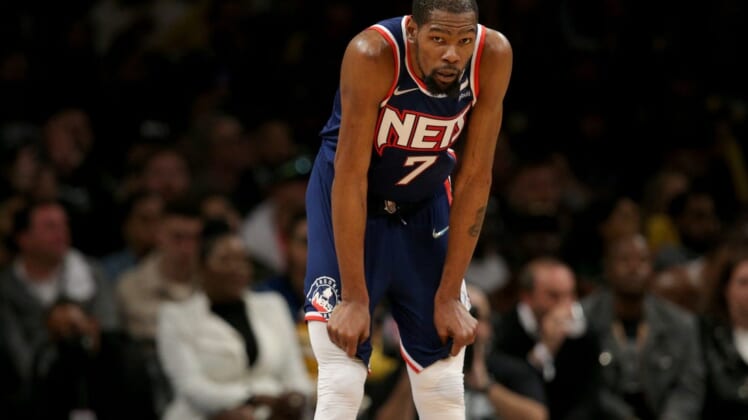 Even as reports circulated that the Suns or Miami Heat could end up being a trade suitor with the Brooklyn Nets for Durant’s services, it was the Suns’ odds that shifted enough to make them the championship favorites for next season, as of Thursday afternoon.

Shortly after news broke of a requested Durant trade request, though, the Suns were briefly listed +550 at FanDuel, ahead of the second favorite Warriors and Bucks, both at +600. The Suns then settled into a tie with Golden State at +600, while the Bucks moved back to +700. The Clippers and Celtics were at +650 on Thursday.

At DraftKings, the Suns’ NBA title odds moved to +600, tied with Boston and just behind the Clippers and Warriors, who were co-favorites at +550.

Durant joined the Nets as a free agent in 2019 but did not play that first season as he recovered from an Achilles injury. He played in 90 total games over the past two seasons with the Nets, who fell in the second round of the playoffs in 2021 and bowed out in the first round this past season.

As Kyrie Irving’s future with the Nets remains in question, he did activate a one-year $36.5 million option with the team this week.

The Nets have made the playoffs in seven of the past 10 seasons, but never advanced past the second round.