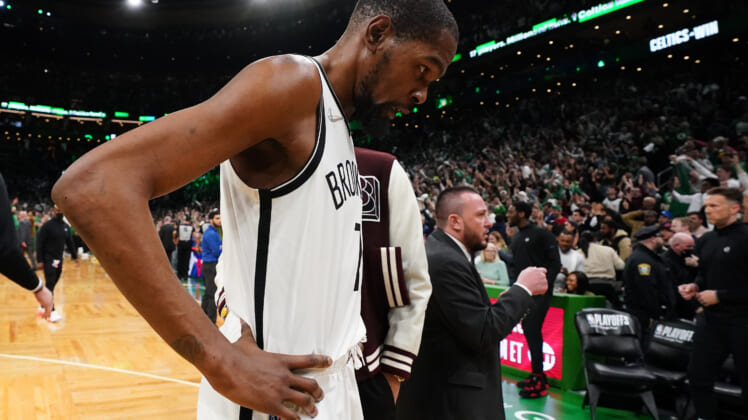 Brooklyn Nets star forward and two-time NBA Finals MVP Kevin Durant just has not been himself through the first two games of their first-round series against the heavily-favored Boston Celtics.

Durant shot just 4-of-17 from the field in Wednesday’s Game 2 road loss to Boston. Durant also committed six turnovers while finishing minus-10 in 42 minutes of action in the 114-107 loss.

This represents the first time in Durant’s career, that he has shot less than 40% while committing six-plus turnovers in two consecutive games, regular season and postseason included.

All said, Durant has shot 13-of-41 from the field with 12 turnovers and a mere eight assists through the first two games of of the playoff series. The future first ballot Hall of Famer looks nothing like the player who has dominated inferior competition throughout his heralded career. And in reality, it could lead to a quick exit in the 2022 NBA Playoffs and further questions about the Nets’ status as a legitimate title contender moving forward.

How bad was Durant Wednesday evening? He shot 0-of-10 with four turnovers in the second half alone. Remember, this was the same game that saw Brooklyn lead by 17 at one point.

One of the backdrops here is Durant’s usage. Over the course of the past 11 games, he’s played north of 40 minutes nine times. I don’t care how great someone’s conditioning is, that’s going to have an impact on a 33-year-old body.

For the Nets, it’s out of necessity. When Durant and Kyrie Irving are struggling, there’s no one else on the roster able to step up. For his part, Irving shot just 4-of-13 from the field in Game 2 — scoring 10 points. Bruce Brown was the Nets’ second-leading scorer behind Durant.

Sure potentially getting Ben Simmons back to make his Nets debut later in this series might help. But what can we expect from a guy who has not played an NBA game since all the way back on June 20 of 2021?

This is the risk Brooklyn took when it traded James Harden for a package centered around Simmons back on February 10. General manager Sean Marks attempted to build the latest iteration of a super team. That experiment failed miserably due to issues between Kevin Durant and Harden. It’s also led to Brooklyn relying a bit too much on the aging veteran.

Nets head coach Steve Nash on Kevin Durant ahead of Game 2, via the NY Post

That’s all fine and dandy. But it’s apparent by Durant’s usage and struggles behind him in Brooklyn that the Nets are relying big time on one of the world’s best players.

Kevin Durant, Brooklyn Nets could be in for a summer of change

Let’s be clear here for a second. Durant could easily turn it around and dominate moving forward in the Celtics series. We’ve seen this on a near never-ending loop throughout his career.

But being down 2-0 against a Celtics team that’s been the best in the NBA over the past two months is not an ideal scenario. If this season ends in a premature playoff exit, we could be looking at a summer of change in the Big Apple.

It’s not yet known how Simmons is going to fit in with Durant. We might get a sample size if the Nets are able to extend this series past four games. But said sample size is going to be too small to draw any concrete conclusion.

Assuming Simmons returns to team up with Kevin Durant next season, the Nets will again be playoff contenders.

With that said, the situation surrounding Irving is a bit less clear. Coming off a drama-filled regular season in which his COVID-19 vaccine stance cost Irving all but 29 games, there’s a question about Irving’s future in Brooklyn.

The NBA champion has a player option of $36.51 million for next season. He could very well decline said option and hit the NBA free agent market this summer. At that point, Irving’s unpredictable nature could come into play.

Remember, the Nets added Harden to the mix early in the 2020-21 season to help build a dynasty in Brooklyn. After just over a calendar year in New York, the former NBA MVP wanted out. Drama behind the scenes related to the Nets’ big three also added another layer to this.

Less than three calendar years after signing with the Nets, we’re now wondering what the future might hold for Kevin Durant in Brooklyn. He’s locked up long-term. But the supporting cast behind the 12-time All-Star could look different next season.