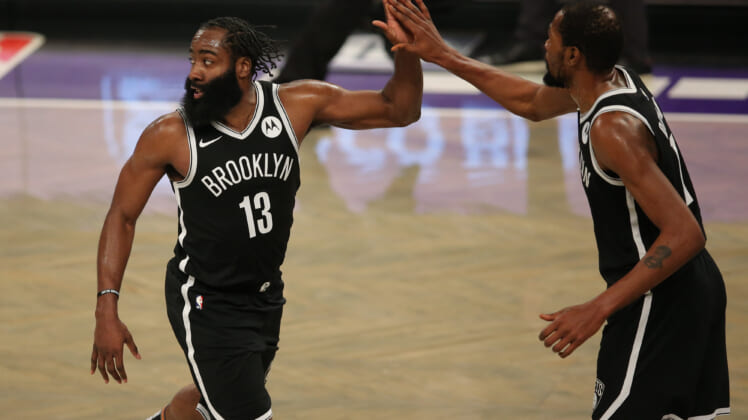 An MVP getting traded in the middle of the season isn’t all that common in the NBA, but this season just before the deadline, that’s exactly what happened when Brooklyn sent James Harden to Philadelphia. While there were plenty of rumors leading up to the eventual trade, it still seemed unlikely for the Nets to be looking to move on from a 10-time NBA All-Star they had acquired just 13 months earlier.

For role players playing near the end of a rotation, getting traded multiple times over a one-year span isn’t that uncommon. But Harden is no part-time athlete.

Yet, the way he began the year may have led some to believe otherwise.

A report by ESPN’s Kevin Arnowitz suggests Kevin Durant was in disbelief over Harden’s playing shape to begin the year, leading to some early frustration in Brooklyn.

“Durant was astonished in the opening weeks of the season at Harden’s lack of explosiveness and sluggish play, something he attributed in large part to Harden’s being out of shape, as he did the ensuing hamstring issues,” Arnovitz reported Tuesday.

This isn’t necessarily breaking news, as Harden himself noted to begin the year, having rehabbed a hamstring injury.

Combined with Kyrie Irving not being allowed to play in home games at the Barclays Center, the Nets faced several hurdles to overcome early on. Harden not being ready to start the year surely didn’t help, but injuries can’t be prevented entirely. In the end, the Nets still latched onto a chance to reach the playoffs via the play-in tournament, which is more than we can say for the Lakers. Perhaps had Harden been ready to go full bore, the story could have been different.

With Ben Simmons potentially making his return to the hardwood during the NBA Playoffs, the Nets could quickly become a force out east. Meanwhile, Harden and Joel Embiid still haven’t quite looked cohesive either, but they did manage to still lock in the fourth seed.

A playoff matchup between the Sixers and Nets would be quite the story, certainly one I’m hoping to see.