Ben Simmons has the final say in his Nets debut, says coach Steve Nash…sort of

Ben Simmons will be the final decider on when he is ready to make his long-awaited Brooklyn Nets debut — for the most part.

On Wednesday, the Nets and Boston Celtics will meet in the second game of their NBA Eastern Conference first-round playoff matchup. The game is the followup to a highly competitive battle the two teams had over the weekend, which was won with a buzzer-beater layup by Celtics star Jayson Tatum.

As currently constituted, the Nets probably have enough to give the C’s a serious scare and possibly upset the second-seeded squad. Especially with Boston missing defensive anchor Robert Williams. However, Brooklyn still has a massive card to play in the possible debut of three-time All-Star Ben Simmons.

Ben Simmons’ Brooklyn Nets debut will be a group decision

The Aussie native has yet to play since being acquired by the team in exchange for James Harden in February. Simmons has been recovering from a nagging back injury and only recently started to fully practice with the team, but it seems like his franchise debut is imminent. The team’s head coach Steve Nash said on Wednesday after shootaround, that the final decision to actually play in this series is mostly up to the 25-year-old.

“There’s no other way than him to say, ‘I’m ready,'” Nash said. “Especially after an absence this long. So whenever he is ready, it’s going to have to be on him to say, ‘I feel comfortable. I feel ready to go. I want to play and I want to contribute.’ We can’t push him places when you have been out this long. It’s got to be something where he is definitely comfortable and ready to play.”

That certainly seems clear-cut and easy. However, in the same conversation, Nash muddied the waters a bit by also adding that it really isn’t completely up to Simmons. And that the organization’s training staff also needs to be on board with the decision. Making it not so much a Ben Simmons decision, but a Simmons and staff decision. 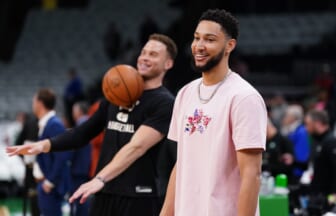 “I think it’s more of a collective decision,” Nash said. “I think they understand that it’s bigger than just a linear equation. This has been a prolonged absence. So I think it’s more, they’re in this together, trying to find a resolution and a timeframe to come back where he is safe to play and well enough to contribute.”

Nets vs Celtics in Game 2 is one of the NBA games today on the league’s Wednesday playoff schedule.