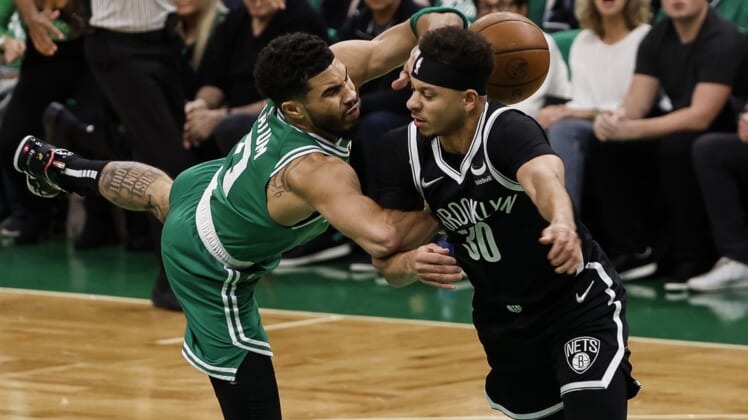 Jaylen Brown scored 10 fourth-quarter points, the Boston Celtics erased a 17-point deficit and rallied for a 114-107 victory over the visiting Brooklyn Nets Wednesday night to take a 2-0 lead in their Eastern Conference first-round series.

Brown made 9 of 18 shots and drove a defensive effort that held Brooklyn to 17 points in the final 12 minutes.

The Celtics trailed by 17 late in the first half and got the deficit down to 90-85 through three quarters before dominating the fourth. Boston did not get the lead until Payton Pritchard’s 20-footer made it 94-92 with 7:49 remaining and Brown hit a layup and a 3-pointer to push the lead to 99-94 with 6:04 left.

Jayson Tatum added 19 points, including seven straight down the stretch for the Celtics, who can open a 3-0 lead Saturday in Brooklyn. Tatum shot 5 of 16 but his 3-pointer over Goran Dragic opened a 108-96 lead with 2:07 remaining.

Kevin Durant led the Nets with 27 points but shot 4 of 17 from the floor. He had six turnovers and never found a rhythm under constant double-team pressure in the fourth quarter. Bruce Brown added 23 but former Celtic Kyrie Irving was serenaded with boos at every turn and scored 10 on 4-of-13 shooting.

Dragic contributed 18 and Seth Curry chipped in 16 as the Nets were 5 of 19 in the fourth and shot 46.1 percent overall.

The Nets held Tatum without a field goal and built a 33-24 lead through the opening quarter. The Nets held a 62-45 lead on Durant’s layup with 1:45 left and the Celtics ended the half with a 10-3 spurt to get within 65-55 entering the third quarter.

The Celtics began the second half on a 19-3 run and trailed 72-70 when Brown stole the ball from Durant and Tatum coasted in for the dunk with 7:38 left.