The 2023 NBA free agent class could very well be among the most stacked in the history of the Association.

Four-time NBA champion LeBron James could hit the open market with an extension unlikely for the Los Angeles Lakers’ star. Currently on the trade block, Kyrie Irving opted into the final year of his contract. He, too, will be a free agent next summer.

This doesn’t even take into account two players from the defending champion Golden State Warriors in Andrew Wiggins and Jordan Poole who have progressed big time recently. Here, we look at the top potential 2023 NBA free agents with a position-by-position break down below.

Note: Of our top-25 NBA free agents of 2022, only three remain on the market. James Harden is likely to re-sign with the Philadelphia 76ers while restricted free agents such as Deandre Ayton and Collin Sexton have yet to find new teams.

King James will turn 38 during the 2022-23 season. That’s astonishing given how how well he played for the Lakers a season ago. James averaged 30.3 points, 8.2 rebounds and 6.2 assists. He would have been a legit NBA MVP candidate if the Lakers had performed better as a team.

James could opt to sign a record-breaking extension this summer. Though, that looks unlikely. Instead, he’ll likely play out the final year of his contract and see how things turn out. There’s no guarantee of a return to the Lakers — with James potentially focused on joining this one fellow former NBA MVP and Western Conference rival. 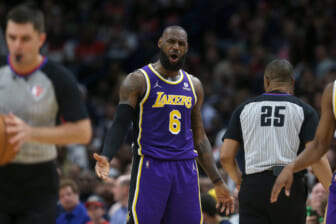 After picking up his option for the 2022-23 season, it sure looks like the enigmatic Irving will play out the final year of his deal outside of Brooklyn. As you already know, he’s been the subject of trade talks. Barring something short of extraordinary, he’s all but gone.

Despite the drama Irving brings to the table, he’ll still be among the top NBA free agents in the summer of 2023. During his three-year run in Brooklyn, Irving is averaging 27.1 points and 6.0 assists on 49% shooting, including a 41% mark from three-point range.

Depending on how he performs next season after suffering a knee injury early in the 2022 NBA Playoffs, Middleton could very well opt out of his $40.4 million deal for the 2023-24 campaign.

When on the court, this former second-round pick has proven himself to be among the game’s most underrated. Middleton is averaging 19.9 points, 5.7 rebounds and 4.7 assists on 39% shooting from distance over the past five seasons.

The improvement we’ve seen from Wiggins since Golden State acquired him midway through the 2019-20 season has been astonishing. He’s morphed into one of the better all-around wings in the game. Wiggins’ performance in the 2022 NBA Finals magnified this with the former No. 1 pick averaging 18.3 points and 8.8 rebounds while playing elite-level defense.

There’s a good chance that the defending champs will max out Wiggins this summer. If that doesn’t happen, he’ll be among the most-coveted 2023 NBA free agents. Still only 27 (that’s crazy), Wiggins is just now hitting his prime.

Barrett, 22, could actually land an extension from the Knicks this summer. The former Duke star is coming off a breakout 2021-22 campaign that saw him average 20 points.

At issue here is shooting. The wing is a career 42% shooter from the field. If he’s going to be relied on as a franchise cornerstone, the former No. 3 overall pick will have to change this narrative.

Acquired by Chicago midway through the 2020-21 season, Vucevic has not seen the same production that defined his Orlando Magic career. Last season saw the skilled big average a nine-year low 17.6 points. It led to speculation that he could be moved this summer.

Despite that, we’re talking about a tremendous two-way big who can hit the perimeter shot and has displayed solid passing skills. It will make him a highly-coveted player on the open market come the summer of 2023.

Horford was merely a means to an end when Boston re-acquired him while moving off Kemba Walker’s contract ahead of the 2021-22 season. It seemed that the five-time All-Star had seen his best days.

Not so fast. En route to helping Boston to the 2022 NBA Finals, Horford averaged 12.0 points and 9.3 rebounds while connecting on an otherworldly 48% of his three-point shots in the playoffs. A perfect fit with the Celtics, it would be a surprise if he landed anywhere else next summer.

With Indiana going into full-scale rebuild mode, Turner is likely going to be the next big-name player moved ahead of the 2022-23 season. Whether he signs an extension with a new team remains to be seen.

What we do know is that Turner would be among the most sought-after NBA free agents next summer. Here’s a dude who is averaging 13.1 points and 6.9 rebounds over the past six seasons. That span has also seen Turner lead the NBA in blocks twice.

Poole, 23, is among the most-talented young guards in the NBA. His combination of speed and three-point shooting was showcased during Golden State’s run to the NBA title in 2022 with the former first-round pick from Michigan averaging 17.0 points on 51% shooting from the field during the playoffs.

It’s highly unlikely that Poole will even come close to sniffing free agency. The Warriors are intent on signing him to a massive extension this summer. The only question here is whether it will be the max of $190 million over five years.

As underrated as they come, the 30-year-old Barnes would likely want to join a contender after he won a title with the Golden State Warriors earlier in his career. The wing is averaging 15.7 points and 5.7 rebounds on 39% three-point shooting over the past three seasons with Sacramento. Perhaps, he’s dealt ahead of the 2022-23 season.

The subject of trade rumors earlier this offseason, Russell is now likely to run it back for his third full season with the Timberwolves. Still only 26, he fell out of favor in the playoffs a season ago. Russell will have to put up a stellar 2022-23 campaign if he’s going to cash in on another lucrative long-term deal.

One of the centerpieces that landed Russell Westbrook on the Lakers last summer, Kuzma put up a heck of a first season in the nation’s capital. The forward averaged 17.1 points, 8.5 rebounds and 3.5 assists on 45% shooting from the field. While the 26-year-old Kuzma will never be considered a franchise cornerstone, he’ll be among the most talked about NBA free agents of the 2023 cycle.

There’s a good chance that the 33-year-old Bogdanovic will be calling another NBA city home next season. He’s been on the block for some time. And following the blockbuster Rudy Gobert trade, Utah is retooling. Either way, contending teams would love to get their hands on a wing who averaged north of 18 points while shooting an eye-opening 39% from distance last season.

Call him an enigma. Say he doesn’t have great shot selection. That’s fine. We are also talking about one of the better wing defenders in the game and someone who brings passion to the court. It should also be noted that the 26-year-old Brooks averaged a career-high 19.4 points a season ago.

All Trent Jr. has done since coming into the league as a second-round pick back in 2018 is up his game each and every year. With the Raptors in 2021-22, the wing averaged 18.3 points while shooting 38% from beyond the arc. The only question here is whether he’ll ever turn into a good all-around player. There’s issues with efficiency and he’s not the greatest of defenders. 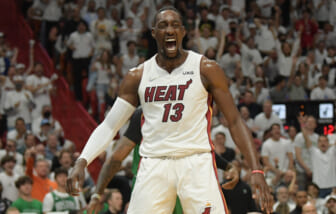 The reigning NBA Sixth Man of the Year saw his stock drop big time during a disastrous playoff run that saw him average 12.6 points on a terrible 23% shooting from distance. If Herro had performed better, we might be talking about the defending champion Heat. We’re intrigued to see how he performs in 2022-23 if the still-young 22-year-old guard doesn’t get a massive extension this summer.

Acquired by Dallas in a blockbuster trade with Houston, it will be interesting to see how Wood performs with Luka Doncic in 2022-23. It will tell us all we need to know about whether he’ll be one of the highly-coveted NBA free agents of the 2023 cycle. Primarily, the high-scoring forward must improve on the defensive end of the court to get paid big time.

It was back in 2018 that Porzingis found himself as one of the best young players in the game. Fast forward nearly a half-decade, and that’s no longer the case. Injuries coupled with ineffective defense has seen his stock drop big time. Even then, we’re talking about a 20-point scorer who can hit from the outside and average a double-double. A strong performance in 2022-23 could lead to Porzingis opting out of his contract.

Pretty much an afterthought in the blockbuster Anthony Davis trade to the Lakers back in 2019, Hart has morphed into a darn good player. The 27-year-old wing averaged nearly 20 points per game on 50% shooting with Portland after being acquired in the CJ McCollum trade last February.

Westbrook’s days of cashing in on huge contracts are pretty much over. He was a disaster in his first season with the Lakers, leading to rumors about a potential trade this summer. Even then, there’s going to be a market for a veteran with playoff experience next summer. If Russ somehow returns to form in 2022-23, said market will be robust.

Will the rebuilding Spurs utilize Johnson as a focal point or look to trade him for more assets? The 22-year-old wing was a focal point last season, averaging 17.0 points and 6.1 rebounds on 40% shooting from three-point range. He’s only going to improve from here.

Charlotte might prioritize signing Washington to an extension given the off-court situation surrounding fellow forward Miles Bridges. If not, he’ll be one of the most-attractice young NBA free agents of the 2023 cycle. Still only 23, the former top-12 pick is averaging 11.8 points and 5.7 rebounds on 38% shooting from distance in three NBA seasons.

An enigmatic figure, this former first-round pick from Tennessee will have to show more consistency on offense if he’s going to land a good pay day as one of the underrated NBA free agents of 2023. With that said, he’s tremendous defender and played well on the other end of the court during Boston’s NBA Finals run (8.6 PPG, 39% three-point in the playoffs).

There’s a good chance that the 26-year-old Poeltl won’t be long in San Antonio. Entering a contract year, the Spurs likely won’t extend him with them heading into a full-scale rebuild following the Dejounte Murray trade. Either way, there’s going to be interest in him between now and next summer. The former top-10 pick averaged career-bests in points (13.5) and rebounds (9.3) on 62% shooting during the 2021-22 season.

A former undrafted free agent, the 31-year-old Curry has quietly put together a tremendous career. Since the start of the 2019-20 season, Curry 13.3 points per game on a resounding 44% shooting from distance. Despite concerns about his defense, teams will show interest in the sharpshooter. That goes without saying. 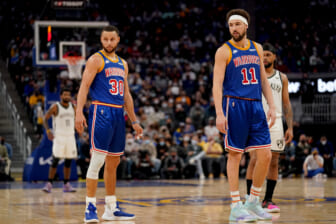