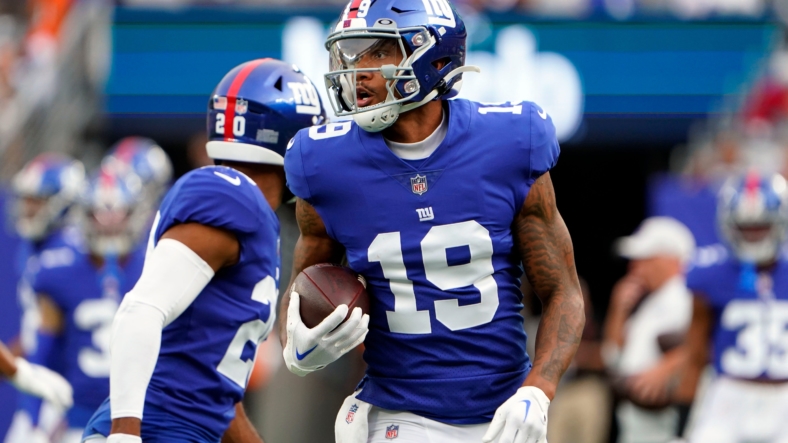 When Dave Gettleman was still running the New York Giants’ front office, the team had a strong need to add a top, playmaking wide receiver. In an effort to address the issue, the general manager struck a four-year, $72-million deal with Kenny Golladay, one of the top free agents from the 2020 offseason.

The move was a curious one at the time, and with every game that passes, the signing becomes even more peculiar.

On Sunday, Golladay played just two snaps on offense for a team that currently has the second-fewest passing yards in the NFL. There’s a clear need to identify a WR1 and even a WR2 in Big Blue’s offense, yet neither Golladay nor Kadarius Toney, the team’s first-round pick from last season, appear anywhere close to filling these roles.

After the game, first-year head coach Brian Daboll spoke about the decision to play David Sills, a 26-year-old receiver with five career catches, over Golladay.

Clearly, Golladay will have to earn his way back onto the field if he has any hopes of topping last season’s numbers when he hauled in 37 receptions for 521 yards. For now, the wide receiver with the largest cap hit in 2022 ($21.1M) is rotting away on the bench.

Giants are stuck with Kenny Golladay

For Golladay and the Giants, his lack of production is a massive concern, and aside from him starting to build chemistry with Daniel Jones, it’s not like they can really do anything about his effort at this point.

To get Golladay off the roster, the Giants would incur a $25.4 million penalty in dead salary on their cap. Of course, a trade is possible, and that would clear $17.7 million and only deduct $3.4 million off their 2022 cap number, but no one is willing to take on his salary unless the Giants toss in a draft pick. As a team that’s in the midst of a rebuild, including a draft pick is not something new GM Joe Schoen can afford to do.

The best solution for everyone involved, includes finding a way to incorporate Golladay into the existing offense, only his skill set makes that difficult. Golladay isn’t like Toney, or Sterling Shepard, where you can simply get them the ball on a screen or an end-around and watch their speed go to work.

No, instead, Golladay needs to be able to win downfield, where Danny Dimes gives his 6-foot-4 receiver a chance to win 50-50 balls. Yet, as they’re working to train Jones’s mindset where he doesn’t turn the ball over, trying to make risky throws downfield to a player who hasn’t shown he can be trusted yet feels like a risky move.

While Golladay was never going to blossom into Randy Moss, it’s a bit mystifying that he hasn’t had even a little bit of success since leaving the Detroit Lions in free agency. After back-to-back 1,000-yard seasons in 2018 and 2019, Golladay played just five games in 2020 before receiving his big payday from the G-Men. We’ll see if he ever gets back on track, but the early returns, through parts of two seasons haven’t been good.

Related: New York Giants prove to be too big for Carolina Panthers, move to 2-0 on 13 points from Graham Gano