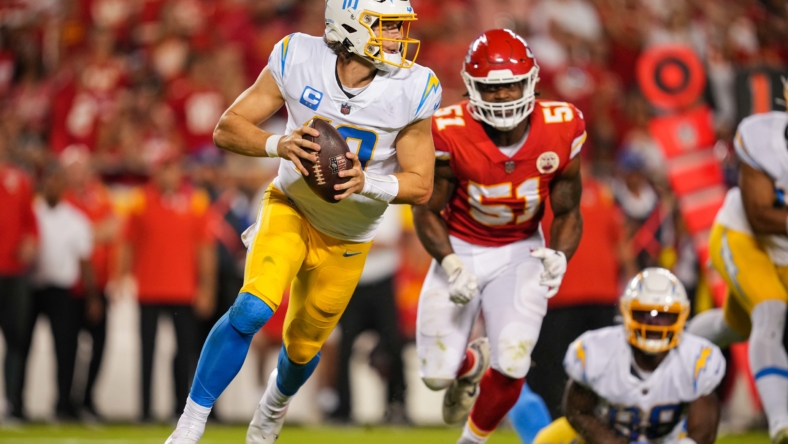 The Kansas City Chiefs will look to take a stranglehold on the AFC West when they visit the Los Angeles Chargers Sunday night on Amazon Prime.

Kansas City finds itself at 7-2 and two games ahead of the second-place Chargers heading into Week 11. It already defeated Los Angeles back in Week 2, making this game much more important from the perspective of both teams.

Patrick Mahomes and Co. find themselves as 5.5-point favorite heading into this one at SoFi Stadium in Southern California. However, Chargers quarterback Justin Herbert has played very well against his division rivals. Will he led Los Angeles to an upset home win to make the AFC West somewhat of a race heading into the stretch run? Below, we provide you with three bold predictions for this huge AFC West tilt.

Andy Reid and Co. have been doing everything possible to find balance for Mahomes on offense. The team was linked to multiple running backs ahead of the Nov. 2 NFL trade deadline. They exhausted a first-round pick on Clyde Edwards-Helaire back in 2020, only to see him struggle with consistency.

Enter into the equation a rookie seventh-round pick in Pacheco who has taken over RB1 duties. The Rutgers product recorded 82 yards on 16 attempts in last week’s win over the Jacksonville Jaguars. He played in 56% of the Chiefs’ offensive snaps while Edwards-Helaire saw action on just four snaps. For his part, the rookie is not happy about losing a fumble in the red zone early in that Jaguars game.

“I was a little bit more mad, a little angrier,” Pacheco told reporters after the game, via the Kansas City Star, “just willing to make the defense feel me and try to eventually break one in the second half.”

Going up against a Chargers defense that ranks dead last stopping the run, Pacheco will have a real opportunity to prove his worth. We’re going to boldly predict that he goes for north of 100 yards on the ground with a touchdown.

Mahomes will be without JuJu Smith-Schuster in this one. He’s been Kansas City’s most consistent wide receiver through 10 weeks and provides the NFL MVP candidate with a ton of options after his first read. That is to say, checking down to Smith-Schuster on intermediate routes. With the former Pro Bowler sidelined, that’s going to have a major impact on Kansas City’s passing attack.

Whether it’s the recently acquired Kadarius Toney or Justin Watson going up against Samuel in this one, we’re expecting Los Angeles’ young cornerback to be more than up to the task. While has only one interception on the season (against Mahomes in Week 2), Samuel is yielding a mere 54% completion mark. Look for him to jump a route and pull off a game-changing interception of Mahomes in this one.

Herbert’s first ever NFL start came in this very same situation back in Week 2 of the 2020 season. The rookie was called on to replace an injured Tyrod Taylor leading up to that game. Taking on the Chiefs at home, Herbert completed 22-of-33 passes for 311 yards with a touchdown and an interception en route to the Chargers losing by just three points.

Things have changed since. No longer is Herbert a wide-eyed rookie taking on a defending champion. Instead, he’s already one of the best quarterbacks in the NFL. The Oregon product has also played extremely well in his career against the Chiefs.

Since that career-opening start, Herbert is 2-2 against the Chiefs. It’s an interesting thing to look at in that Kansas City is 8-1 against all other AFC West foes during that span. We boldly predict that Herbert will outplay Mahomes in this one, pulling the Chargers to within one game of Kansas City in the division.