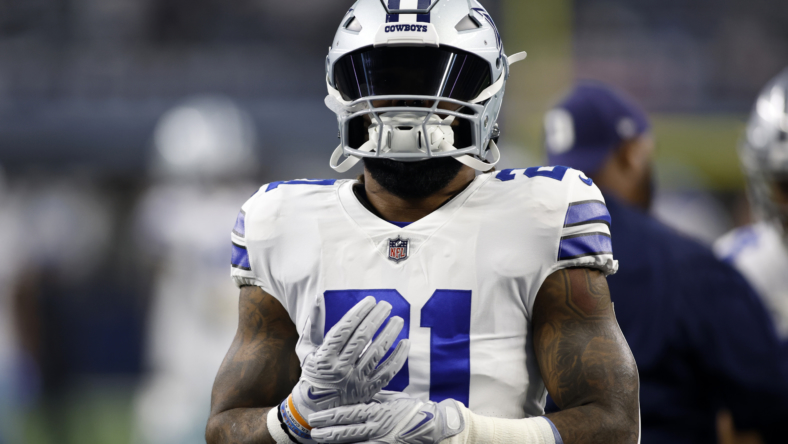 Our NFL injury report from Week 11 is out. There’s multiple big-name quarterbacks heading the list, including two NFC West signal callers in that of Matthew Stafford and Kyler Murray, both of whom missed last week’s action.

Remaining in the NFC West, record-breaking wide receiver Cooper Kupp suffered an ankle injury this past Sunday and could miss some time. Meanwhile, Dallas Cowboys running back Ezekiel Elliott is nearing a return from an injury of his own.

Below is our initial NFL injury report for Week 11. We will have daily updates throughout the next several days.

The struggling Stafford missed last week’s loss to the Arizona Cardinals with a concussion. He was seemingly set to clear through protocols in the days leading up to the NFC West matchup. But was a late scratch.

As with all head injuries, Stafford will have to pass through the protocols in order to go against the New Orleans Saints next week. Either way, the 3-6 Rams are a hot mess on offense right now. Given that Cooper Kupp is dealing with an ankle injury of his own, we don’t expect the NFL’s 29th-ranked scoring offense to improve too much against New Orleans regardless of whether Stafford takes to the field.

Murray initially showed up on last week’s NFL injury report with a hamstring issue. It forced him to miss practice on Wednesday before returning on a limited basis the following day. Surprisingly, Arizona then ruled him out for Sunday’s game against the aforementioned Rams.

In Murray’s stead last week, Colt McCoy completed 26-of-37 passes for 238 yards with a touchdown and zero interceptions. It’s not yet known whether Murray will be able to go next Monday night against the 49ers in Mexico City.

Herbert exited Sunday’s loss to the Detroit Lions with a hip injury and was almost immediately ruled out for the remainder of the game. That’s typically not a great sign. This can’t be seen as good news for Justin Fields and Co. heading into Week 11 against the Atlanta Falcons.

Elliott has missed each of the past two games with a knee injury. Given that Dallas had a bye mixed in, it’s surprising that he has not been able to return to the field. The former Pro Bowler did get in some practice time last week, meaning that there’s a good chance he’ll be able to go against the Minnesota Vikings come Sunday.

The interesting dynamic here is the presence of Tony Pollard in Big D and the fact that he’ll likely continue to see a ton of touches. The young back from Memphis has put up 246 rushing yards and four touchdowns at a clip of 6.8 yards per attempt in the two games Elliott has missed.

Fournette suffered a hip injury in Tampa Bay’s win over the Seahawks in Germany this past Sunday and did not return to action. In his stead, rookie Rachaad White provided Tom Brady and Co. the balance they have desperately been seeking this season. The third-round pick put up 105 yards on 22 attempts.

The expectation is that Fournette will be able to go when Tampa Bay returns from its bye against the Cleveland Browns in Week 12. With that said, we’re not too sure he’s going to retake lead ball-carrier duties for the Bucs. Fournette is averaging a mere 3.4 yards per rush on the season.

When Cooper Kupp went down in Sunday’s loss to the Cardinals, it sure the heck seemed like he suffered a serious ankle injury. The record-breaking receiver was down on the field in pain for a while as the entire Rams’ sideline looked on.

One day later, and it seems that Kupp has avoided a serious injury. With that said, he is expected to miss some time pending the outcome of an MRI. Right now, it seems that Kupp suffered a high-ankle sprain. That tends to sideline players multiple weeks.

The reigning Super Bowl MVP has put up 75 receptions for 812 yards and six touchdowns this season. With Stafford also injured and the struggles this team has seen on offense, this is just more bad news. We’ll have further updates relating to Kupp in our NFL injury report as the week plays out.

The All-Pro wide receiver is dealing with both a torn labrum and a hairline fracture in his hip. Chase could play through the labrum tear, but Cincinnati can’t clear him to play until the hairline fracture heals.

The good news in this initial NFL injury report? Chase could very well return from the injury once the Bengals themselves return from a bye in Week 11. For a team that’s 5-4 on the season, that’s no small thing. In the past two games that Chase did suit up before the injury, the stud receiver recorded 15 catches for 262 yards and four touchdowns.

Smith-Schuster exited Sunday’s game against the Jacksonville Jaguars with a head injury. Almost immediately, it was noted that he’s dealing with a concussion. Obviously, Smith-Schuster will have to pass through the necessary protocols to play next week against the Chargers.

A free-agent signing from the Steelers this past spring, Smith-Schuster has hauled in 46-of-64 targets for 615 yards from Patrick Mahomes on the season. He’s obviously been a key cog in replacing the production Kansas City previously saw from the recently-traded Tyreek Hill.

Allen has been a fixture on the NFL injury report throughout this season. He suffered a hamstring injury back in Week 1 and didn’t return to the Chargers until Week 7. Allen then sat out each of the past two games for the Chargers.

We’ll have a better understanding of his status for Week 11 over the next few days as Los Angeles participates in practice ahead of this big “Sunday Night Football” matchup.

Jeudy suffered an ankle injury in Denver’s loss to the Tennessee Titans on Sunday. He was carted off the field and could not put any pressure on his foot following the injury.

Though, there’s good news on this front. Jeudy is getting an MRI on Monday. The expectation is that he avoided a serious injury. With that said, there’s a good chance the former first-round pick will not be able to go for Russell Wilson and Co. against the Raiders on Sunday.

Doubs suffered a high-ankle sprain during Green Bay’s Week 9 loss to the Detroit Lions and has already been ruled out for Thursday’s matchup against the Tennessee Titans.

A fourth-round pick out of Nevada back in April, Doubs has recorded 31 receptions for 314 yards and three touchdowns in nine games this season. With him out of action, fellow rookie Christian Watson should see more action against Tennessee. He scored three touchdowns in Week 10. 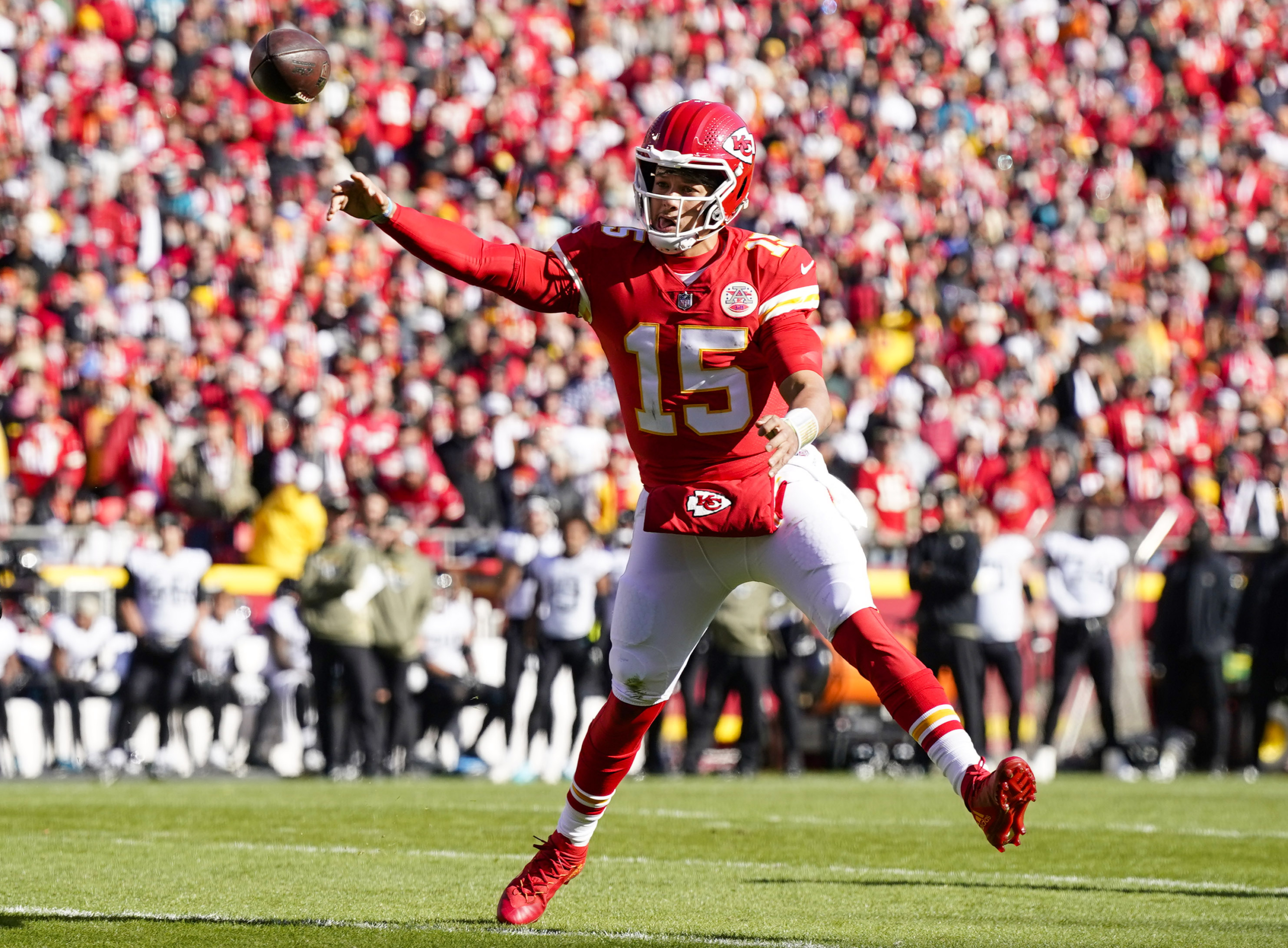 An inconsistent force this season, the high-priced Williams missed Week 9’s outing against the Falcons due to a high-ankle sprain. His injury is said to be week-to-week, meaning he also didn’t suit up Week 10 against the 49ers. As with Allen, we’ll have further updates on our NFL injury report as the week progresses. For now, he’s more doubtful than questionable to go against Kansas City.

Andrews sat out Baltimore’s win over the New Orleans Saints ahead of its Week 10 bye with a shoulder injury. He was questionable heading in. But it made sense for the Ravens to hold the star tight end out of action with a bye coming up.

Ravens head coach John Harbaugh announced on Monday that it’s looking good for Andrews to return to action against the Carolina Panthers in Week 11. This is no small thing for Lamar Jackson and Co. In eight games this season, Andrews has caught 42 passes for 488 yards and five touchdowns.

Njoku sat out Cleveland’s Week 8 game before the team’s bye due to an ankle injury. He told reporters early last week week that he hoped to play Sunday against the Miami Dolphins. That did not happen. Fresh off signing a massive extension, Njoku has performed well this season with 34 receptions and 418 yards in seven games. The hope is he’ll be back on the field Week 11 against the Buffalo Bills.

A three-time Pro Bowler dating back to his days with the Philadelphia Eagles, Ertz pulled up lame with a knee injury in Arizona’s Week 10 win over the Los Angeles Rams. He was seen in a knee brace following the game.

Ertz has now been ruled out for the remainder of the season in what is yet another major blow for the injury-plagued and struggling Cardinals. Prior to going down, he led the team with 47 receptions.

Update: Goedert has been placed on injured reserve

Goedert suffered a shoulder injury in Philadelphia’s loss to the Washington Commanders on Monday night. The team then announced that the star tight end will miss multiple weeks of action.

This is no small thing for Jalen Hurts and Co. Goedert has caught 43-of-53 passes for 544 yards with three touchdowns in nine games this season. A block-first tight end in Jack Stoll figures to be next up for Philadelphia, likely increasing the targets shares A.J. Brown and DeVonta Smith receive.