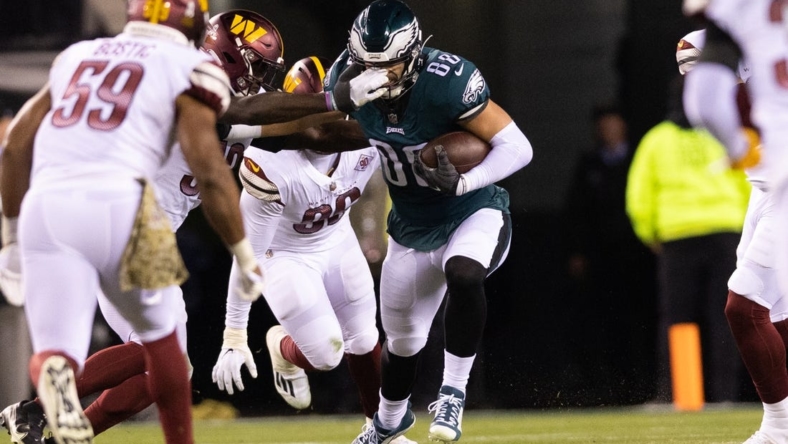 He’ll have to miss at least four games. It is not believed to be a season-ending injury.

The move was one of several the Eagles made Wednesday.

Defensive tackle Marlon Tuipulotu was also placed on IR with an undisclosed injury. He played in nine games, including a start on Monday against the Washington Commanders. The second-year player has 16 tackles and a sack on the season.

The Eagles signed veteran journeyman Linval Joseph to a one-year contract in hopes of bolstering their run defense.

The Eagles also activated tight end Tyree Jackson from the physically unable to perform list, the final day to do so. He joins Jack Stoll and rookie Grant Calcaterra in the tight end room.

The team opened the 21-day practice window for defensive end Janarius Robinson, who has been on injured reserve since Oct. 15.

Goedert was injured during Monday night’s loss to Washington. Goedert apparently sustained the injury late in the fourth quarter when he was yanked down by the facemask and landed awkwardly, resulting in a fumble. No facemask penalty was called on the play.

Goedert had three catches for 23 yards and a touchdown in the previously unbeaten Eagles’ 32-21 setback against the visiting Commanders.

Goedert, 27, has 43 catches for 544 yards and three touchdowns in nine starts this season. He ranks second in the league in yards and fourth in catches among tight ends.

Also Wednesday, the Eagles signed safety Marquise Blair to the practice squad. He takes the spot of wideout Auden Tate, who was released Tuesday.