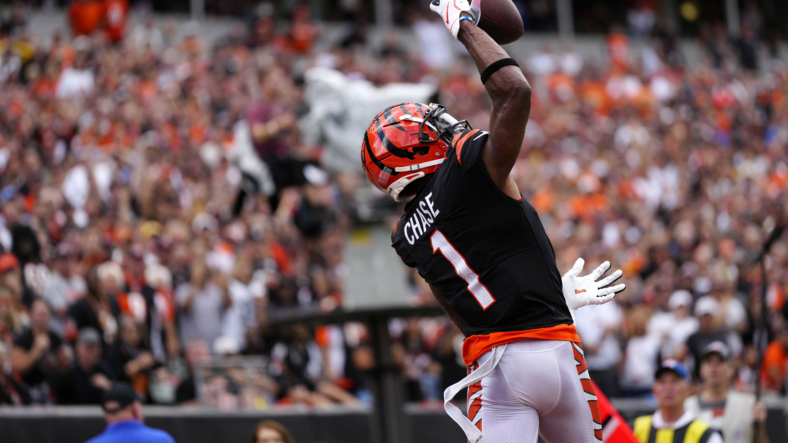 The Cincinnati Bengals are set to face the Dallas Cowboys on Sunday. Both playoff teams from a year ago, yet both are still seeking their first win this season. One big matchup spectators can’t wait to see is second-team All-Pro wide receiver Ja’Marr Chase going one-on-one with All-Pro cornerback Trevon Diggs.

At his best, Chase is almost impossible to cover. The 2021 Offensive Rookie of the Year has been held to under 50 receiving yards in just six of his 18 career NFL games played. Equally as impressive, Chase has either topped 100 yards or two touchdowns in eight of his first 18 games. As crazy as it sounds, this 22-year-old’s just getting started as he matures into his second season out of college.

As much respect as Chase receives, where some would consider him among the very best wide receivers in the NFL, if not the best, Cowboys cornerback Trevon Diggs has earned a similar amount of consideration to be among the best ballhawks in football. He led the NFL with 11 interceptions in 2021, his second season as a pro.

Yet, Diggs has his flaws too. As the league has learned, Diggs is a big risk-taker. His gambles have led to several big gains. According to Pro Football Focus, Diggs allowed the most receiving yards among all cornerbacks in 2021, giving up 1,068 yards. He also allowed a league-worst 18.7 yards per reception. In other words, teams know Diggs is susceptible to giving up the big play.

Chase knows this too, and he was asked about the juicy matchup in store for Sunday. Here’s what the explosive receiver had to say.

Clearly Chase is licking his chops as he prepares to face Diggs. Usually you don’t label a player who you perceive to be elite as an ‘athlete’, yet that’s what Chase called his upcoming opponent. Interestingly enough, these two players have faced each other before, just not in the NFL yet.

As mentioned, Chase played against Diggs in college in one of the highly anticipated LSU Tigers vs Alabama Crimson Tide matchups back in November of 2019. In fact, it was a game the Tigers managed to win 46-41 over coach Nick Saban’s squad to give Alabama their first loss of the season.

Some of that success can be attributed to Chase and his pure dominance on the day. He hauled in six Joe Burrow passes for 140 yards and a touchdown.

Who knows what’s in store for gameday now that they’re both in the NFL. It’s hard to argue either player’s immediate success, but you can tell Chase isn’t afraid of the competition. Perhaps that’s because he’s already shown he can beat him in their previous matchup. Grab your popcorn, this could be another fun one.