The Philadelphia Eagles intend to stand pat with Jalen Hurts as their starting quarterback in 2022. After reaching the playoffs in his first full season in control this isn’t much of a surprise.

Yet, the quarterback market is expected to heat up this offseason, with a couple of Pro Bowl signal-callers possibly becoming available, by the likes of Russell Wilson and Deshaun Watson, and who knows what else. Despite some game-changing QBs potentially being on the table over the next few months, the Eagles like what they already have with Hurts.

Making an appearance during the Eagles’ season-ending press conference, general manager Howie Roseman alluded to Hurts remaining the starter in 2022, preferring to build the team around his skillset.

“We talk about Jalen and the growth he had, really first-year starter, second-year player, leading this team to the playoffs — tremendously impressed with his work ethic, his leadership,” Roseman said. “The last time we talked was during camp and we said we wanted to see him take the bull by the horns and he certainly did that.”

It makes sense for the Eagles to continue supplying Hurts with more tools for him to succeed. While they took a while to find their offensive identity, once they hit 236 rushing yards in Week 8, they never looked back on their rushing attack. Philly fans witnessed their team not only find their identity but excel with their new approach, becoming the best rushing team in the NFL, averaging 156.1 yards per game.

We saw the instant boost DeVonta Smith provided for Hurts as a passer, but the Eagles need more receiving depth than Smith and Dallas Goedert. Quez Watkins has earned a role in 2022, but Jalen Reagor has been nothing but a bust.

Now, the Eagles have a full offseason to continue molding their RPO offense, helping Hurts take the next level in his development. The best part is they’re entering the player movement stage with plenty of draft capital, if they’re tempted to make a big move. 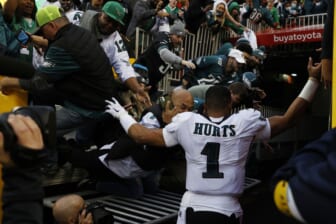 With starting role solidified, Jalen Hurts can thrive in 2022

Despite Jalen Hurts being the team’s starter all season, the Eagles provided plenty of competition behind him on the depth chart. Not only did they have a Super Bowl-winning QB, with Joe Flacco waiting in the wings, they also traded for Gardner Minshew II that included compensation tied to his playing-time just before the year began.

This indicated the Eagles either weren’t confident in Hurts staying healthy (he did miss two starts in 2021) or them not yet being sold on him being their starter. He erased any questions about whether Minshew would surpass him, even if the Mustache wasn’t too sure himself.

Not only did Hurts show he was the unquestioned leader, completion rate jumped by nearly 10% from 52% up to 61.3%. While he’s still erratic at times, some inconsistency is to be expected from a 23-year old QB. Especially when he’s still learning which pass-catchers he can trust, and which will let him down.

With a better receiving corps in 2022 and hopefully a fully healthy season starting all 17 games, Jalen Hurts might be able to legitimately reach 4,000 passing yards and 1,000 rushing yards. He would become the first NFL player to ever do so in a season. Not Randall Cunningham, not Michael Vick, not even Lamar Jackson has ever accomplished a 4000-1000 season.

The Philadelphia Eagles already have their starting QB with Jalen Hurts, and he’s on a very affordable contract through 2023, since he was selected in the second round of the draft. Generally when teams quickly identify their franchise quarterback while on such a team-friendly contract, they push more of their chips into the pile, which is what we could see the Eagles do this offseason.

While the draft is still four months away, the Eagles already know where they stand. Unless they make a trade, the Eagles will have three first-round selections, at 15, 16, and 19. There’s no way they keep all three.

Don’t be shocked if they decide to package two, or even all three of the selections in an effort to move up the draft board, with an eye on a top-ten prospect. Or, they could always go with the proven pro, trading for a veteran who may want a change in scenery. There are several candidates, including Calvin Ridley.

Not satisfied with just appearing in the playoffs, the Eagles appear destined to do something big this offseason. NFL fans will have to wait a bit longer to find out what building around Hurts entails, but those in Philly should be excited about the future of the Eagles.

One thing that doesn’t appear to be on the table, based on their GM’s comments, is using their assets to acquire a star QB. They feel they may already have one in Jalen Hurts, he certainly brought them further than Carson Wentz did, a season ago. 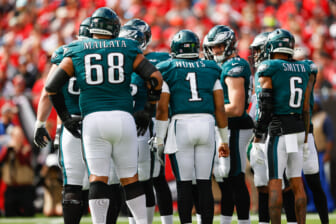