Weeks ago, we heard about Philadelphia Eagles quarterback Gardner Minshew II begging to take over as the starting quarterback in place of Jalen Hurts. It’s a bit of a funny concept considering the Eagles went on an absolute tear to sneak into the playoffs with Hurts at the helm.

Still, it’s hard not to love Minshew’s moxie at this point. He’s certainly driven, he wants to play, and he feels he’s earned it. Many starting quarterbacks are confident, sometimes to a fault. But in this case, we just see Minshew’s competitiveness.

Back when he was “competing” to be the Jacksonville Jaguars starting QB, Minshew provided some gold quotes. In doing so, he claimed, “No. 2 is not an option“, in reference to the backup quarterback gig in Jacksonville. The organization later traded him to the Eagles in exchange for a conditional sixth-round pick in the 2022 NFL Draft, where he’s continued to operate as their No. 2 QB.

When Hurts went down with an injury in Week 12, Minshew got his first chance to start in Philly. He thrived against the New York Jets, completing 20-of-25 passes for 245 yards and two touchdowns in a convincing win. In fact, Minshew had a perfect QB rating in the first half after completing 93.3 percent of his passes, which tied Donovan McNabb for the highest rate by an Eagles QB in 30 years.

After his performance, Minshew reportedly went to Eagles head coach Nick Sirianni and asked for the starting QB gig, over Hurts according to ESPN’s Chris Mortenson. He also asked what it would take for him to become the team’s starter. Sirianni reportedly responded with “it’s not going to happen“.

Personally, I find this exchange to be hilarious. Of course the franchise wasn’t going to suddenly turn to Minshew when Hurts has been leading a winning team. Still, it never hurts to try.

Anyway, the only reason we’re rehashing this today is because coach Sirianni was recently asked about the private exchange, and whether or not it occurred.

“I don’t want to report anything or talk about any conversations that I had with any player in my office,” Sirianni said Thursday. “That’s a conversation between myself and that player.

“But I will say about Gardner, he is a competitor. He is locked in, whether he’s the backup, whether he’s playing. The guy is going to prepare like crazy, no matter what the situation, and he’s competitive.

“But obviously Jalen is our starter“

Those quotes essentially confirm the exchange did happen, which only boosts the appeal of Gardner Minshew in my mind. This guy’s a character, but he can play too. Some team will be calling the Eagles this offseason in an effort to see just how much game Minshew has in that mustache. 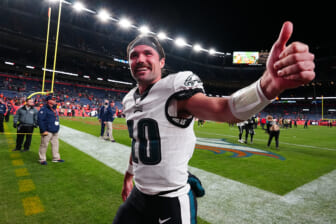