When the Jacksonville Jaguars drafted Trevor Lawrence, quarterback Gardner Minshew knew he needed a trade to get a better opportunity for starts. Things haven’t quite worked out in 2021 with the Philadelphia Eagles, opening the door for Minshew to play elsewhere in 2022.

Minshew is not a franchise-caliber quarterback. But through his first three NFL seasons, it’s become evident that the former sixth-round pick could be on the Ryan Fitzpatrick trajectory. It’s a level of play that would be an upgrade for multiple teams, including playoff contenders. As a result, Minshew’s name will be floated in NFL trade rumors in 2022.

The Denver Broncos won’t be meeting Teddy Bridgewater’s asking price, it would be rather stunning if any team felt comfortable approaching that number. While general manager George Paton will be extremely aggressive in pursuing a quarterback upgrade, there’s a possibility he might need to settle for a second-tier option. If that’s the case, Minshew is an intriguing option.

It’s an ideal situation for Minshew. Denver’s defense and offensive weapons already make this club a playoff contender. But we’ve often seen that Bridgewater’s refusal to throw deep and the lack of respect opponents have for this passing attack, impacts receivers like Courtland Sutton.

Philadelphia would likely settle for a fifth-round pick for Minshew, who would be entering a contract year. He’s better than what Denver has under center right now and at a $965,000 salary. that opens up unbelievable spending flexibility.

Ben Roethlisberger isn’t coming back in 2022, that’s great news for the Pittsburgh Steelers. Taking his contract off the books will help the Steelers’ salary cap. But this is also a front office that doesn’t like to spend significant draft capital to acquire players via trade. That’s where a trade for Minshew comes in. 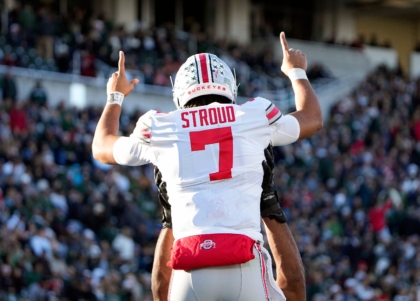 As we mentioned above, it’s likely only going to cost a team one of its Day 3 picks to land Minshew. The club-friendly contract also allows for anyone to absorb his salary. Those are two important factors for Pittsburgh, but there’s another. Minshew can be the bridge quarterback for a rookie, holding down the starting position with steady play in 2022. In an offense with Najee Harris, Chase Claypool and Diontae Johnson, Minshew could also put up some quality stats. Plus, Pittsburgh would love the beard and his personality.

The Seattle Seahawks are holding out hope that Russell Wilson is willing to return in 2022. But it’s obvious that there is a level of distrust between the franchise quarterback and the front office. Those fences are unlikely to be mended in the spring and with Seattle coming off a disappointing season, a trade feels inevitable.

With that said, the Seahawks don’t want to launch into a complete rebuild. There is too much money invested in Pete Carroll and at wide receiver for this organization to hit the reset button. Enter Gardner Minshew. He could step in as the starting quarterback in 2022, helping this team play competitively as it figures out its long-term plans with the arsenal of picks acquired in the Wilson trade.