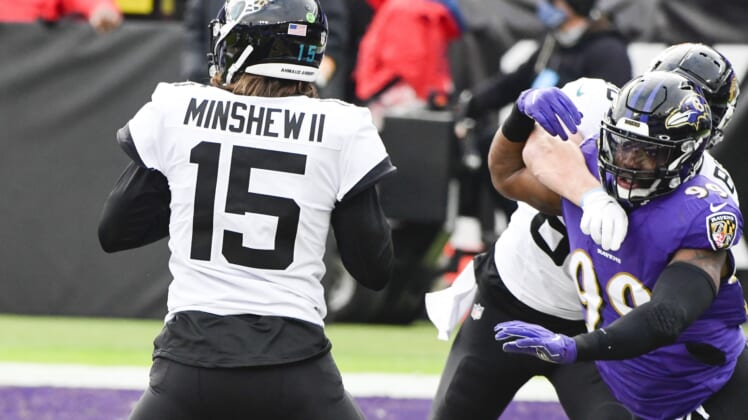 The Jacksonville Jaguars will draft Trevor Lawrence with the No. 1 overall pick in the 2021 NFL Draft. With the franchise star set to be officially introduced to the team in a matter of weeks, the future for Gardner Minshew looks increasingly uncertain.

Minshew, a sixth-round pick in the 2019 NFL Draft, quickly outplayed his draft status. The former Johnny Unitas Golden Arm Award recipient stunned the NFL world in his rookie season, throwing for 3,271 passing yards and posting a 21-6 TD-INT ratio. “Minshew Mania” quickly developed a following in Jacksonville, with many hoping that he would be the face of the franchise.

Following a one-win season, though, the Jaguars are back in the market for a quarterback. After landing the No. 1 selection, thanks to some late-season wins by the New York Jets, Jacksonville has the chance to land a generational talent. With the pick a foregone conclusion, rival clubs started inquiring about a trade for Minshew.

During a conference call, Meyer told reporters that the team isn’t fielding trade offers right now for Minshew. The first-year NFL coach recently met with the young quarterback and believes there is value in keeping him on the roster.

Will the Jaguars trade Gardner Minshew?

Jacksonville shouldn’t feel rushed to trade the 24-year-old quarterback. He is under contract for $897,721 next season and would carry a $1 million cap hit if kept around for the 2022 season. Given what it cost the Chicago Bears to sign Andy Dalton and the Houston Texans to add Tyrod Taylor, Minshew might be the most valuable backup quarterback in the NFL.

Many NFL teams are facing a salary-cap crunch and an experienced starter making less than $900,000 this season is extremely attractive to general managers. Not only would he help a team spend its cap space on other positions, but the fan support for “Minshew Mania” would likely generate revenue from jersey sales, t-shirts and posters. There’s also some upside with Minshew and that’s difficult to find in the free-agent market.

Minshew’s stats from the past two seasons are also impressive, especially given the inconsistent supporting cast around him. Across 23 career games, he has completed 62.9% of his passes, boasts a 37-11 TD-INT ratio, averages 6.9 yards per attempt and has a 93.1 passer rating. By comparison, Sam Darnold has a 6.5 YPA and 79.1 passer rating across the last two seasons.

Given the Jets want a second-round pick for Darnold, it’s reasonable for Jacksonville to play hardball with other clubs. Teams like the San Francisco 49ers and Chicago Bears would love to have Minshew for a variety of reasons, but it will come at a cost.

Ultimately, Meyer will likely relent and starting fielding offers for Minshew. It will just have to take another team offering a valuable draft pick that makes it worth it for the Jaguars to trade a cheap, talented quarterback.