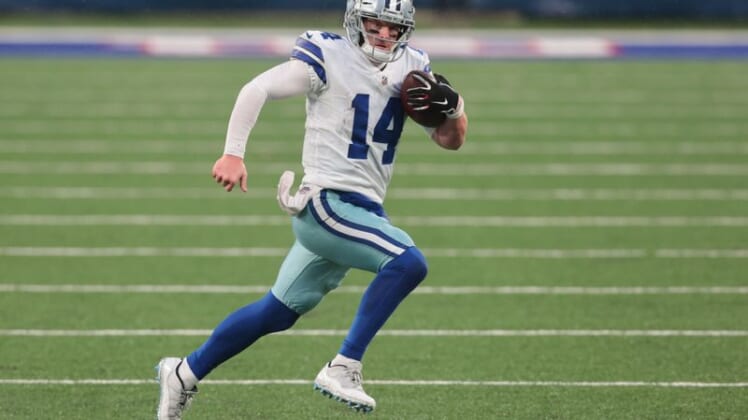 When the Chicago Bears signed Andy Dalton earlier in NFL free agency, the expectation was that he would compete with Nick Foles for the starting quarterback job next season. In fact, Dalton’s mere one-year, $10 million contract pretty much guaranteed this.

Apparently, that’s not the case. In talking about his decision to sign with Chicago on Thursday, Dalton seemed to break some news to the media.

“They told me I was the starter. That was one of the reasons I wanted to come here,” Dalton said, via Chris Emma of 670 The Score. “That’s the assurance I got.”

This has to be seen as a pretty big surprise. With Foles making $6.67 million this season, the Bears now have a cheap quarterback room. Whether that works out for embattled head coach Matt Nagy and general manager Ryan Pace remains to be seen.

Is Andy Dalton a starter-caliber quarterback?

There’s 32 starting quarterback jobs to go around in the NFL. In no way does this mean that there’s 32 starter-caliber quarterbacks in the league. Dalton might fit into the category that suggests demand is much higher than supply.

Last season saw the three-time Pro Bowler complete 64.9% of his passes for 2,170 yards with 14 touchdowns against eight interceptions in nine starts after taking over for an injured Dak Prescott with the Dallas Cowboys. Prior to that, he was a fledgling starter for his original Cincinnati Bengals team.

We’d have to go back to the 2015 season in order to find a performance from Andy Dalton that suggests he will be a quality starting quarterback for the Bears this coming fall and winter.

That season saw the former second-round pick from Texas Christian throw 25 touchdowns against seven interceptions en route to leading Cincinnati to a 10-3 record in 13 starts.

What exactly are the Chicago Bears doing?

Barring a magical run to the NFC North title and a deep stint in the playoffs next season, it’s highly likely both Pace and Nagy will be gone. So, it doesn’t make too much sense for Chicago to trade up from the 20th pick in next month’s NFL Draft for a quarterback. The two will want to get an immediate-impact player.

With star wide receive Allen Robinson wanting out of dodge after being handed the franchise tag, there’s some major issues at the skill-positions on offense in Chicago. The team has also been pretty darn inactive in free agency. That obviously doesn’t bode well for Andy Dalton heading into the 2021 season.

One can conclude that the Bears’ brass has decided to panic. They pulled the trigger on Dalton after the Seattle Seahawks turned down a huge trade offer for Russell Wilson. Chicago did so with Deshaun Watson still wanting out of Houston and potentially set to be dealt here soon.

Andy Dalton is not going to be the quarterback to take this team to the next level after an eight-win season. It has Chicago in quarterback purgatory and with no real end in sight. Handing him the starting job before training camp adds another layer to this.