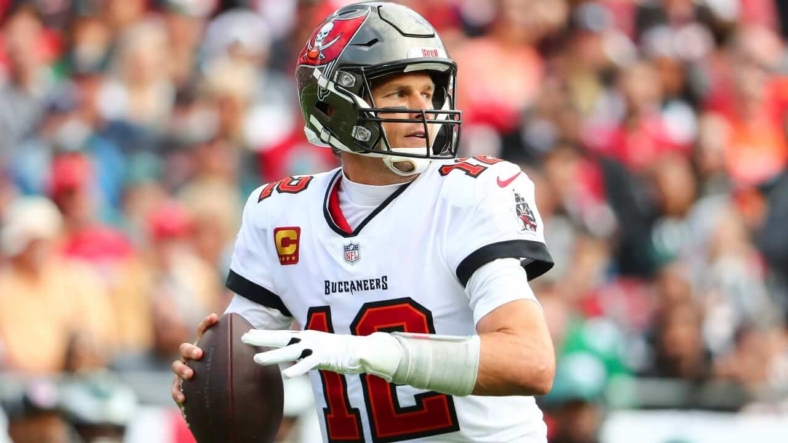 Tampa Bay Buccaneers fans are thrilled to have Tom Brady back to lead the 2022-23 season. And with the return of most offensive weapons, Tampa Bay is a safe bet for a Super Bowl contender. The Bucs also enter a struggling division with the lack of major threats in the Saints, Falcons, and Panthers.

Trying to find where to livestream all of the Tampa Bay Buccaneers games this season? Look no further. You can watch nearly all of the Bucs 2022-23 games on a streaming service that has Fox, CBS, NBC, ESPN, and NFL Network. Let’s break down which options are the best:

Where can you stream almost all of the Tampa Bay Buccaneers games?

Sling TV is one of the best options for cord-cutters not looking to spend more than $50 per month but still watch Tom Brady and the Bucs make another splash this season. Sling TV has access to local games on Fox and NBC along with Monday Night Football on ESPN, making it a strong option for Bucs fans.

The base plans start at $35 per month, or you can merge both packages for $50 per month. Sling TV is also running a limited time promotion to get the service for 50% off your first month right now.

Hulu + Live TV not only holds one of the best on-demand libraries of movies, shows, and originals but also hosts over 75+ live TV channels for just $69.99 per month. You can also sign up for the ad-free option for an additional $6 per month. The best part is that when you sign up now for either of the two Hulu + Live TV plans, you’ll get Disney Plus and ESPN Plus for free. All things considered, it was easy for our team to rank Hulu + Live TV as one of our best options this season.

DIRECTV STREAM is another strong option to watch the NFL mainly due to its wide channel offering of national and local channels. Which is almost exactly what sports fans need this upcoming season. And for a limited time, DIRECTV STREAM is giving customers a five-day free trial to let you test the service before committing to a monthly package. DIRECTV STREAM is also offering $40 off your first two months, but the deal won’t last forever!

FuboTV made the list thanks to its flexibility and availability for sports fans. There are four main plans with FuboTV, all of which offer channels like Fox, CBS, NBC. Plus, some add-ons even offer NFL RedZone and NFL Network. Although it can be a bit on the more expensive side for bigger plans, the channel list makes the cost worth it for most customers. You can also start each plan with a seven-day free trial.

YouTube TV is another great live TV streaming service for NFL fans. And YouTube makes it simple by only offering just two plans — one basic and one for Spanish speakers. At $64.99 per month, the base plan allows you to watch on-demand movies, shows, and some originals as well as over 85+ live TV channels. On the other hand, the Spanish plan is just $34.99 per month and provides access to over 28 Spanish networks, including live sports. Right now, YouTube TV is also running a promotion to get $30 off your first three months ($10 per month).