No. 13 Florida Gators seeks answers on offense vs. FAU Owls

Florida intends to put its offense in gear again this season, though the No. 13 Gators figure to have to use some different parts.

The season begins with a Saturday night matchup against Florida Atlantic in Gainesville, Fla.

“Can’t wait to see the Gator fans back out there,” Florida coach Dan Mullen said. “The electricity, the energy in the stadium.”

But will the Gators be able to generate as much spark on offense as in the past? Returning players accounted for only 14.2 percent of the rushing yards and 5.5 percent of the passing yards. 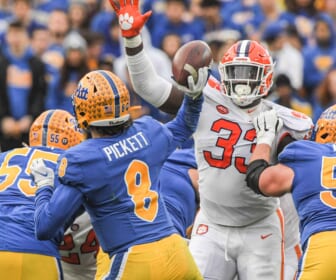 The expected starter at quarterback for Florida is Emory Jones, who takes over after record-setting Kyle Trask wrapped up his college career. Jones had two of his 32 passes end up as touchdowns (among 18 completions) last season in a limited role. He threw one interception.

Florida is looking to replace Trask, who threw 69 touchdown passes and 15 interceptions in 27 career games, and tight end Kyle Pitts from the high-powered offense.

While Jones figures to be well-groomed for the upgraded responsibilities, a chunk of preseason attention has fallen on backup quarterback Anthony Richardson, a Gainesville product.

“I think he has prepared himself to be the starter, which is what you want,” Mullen said.

The Gators are counting on receiver Jacob Copeland to emerge with a breakout season. He recorded five touchdown catches across the past two seasons.

Florida Gators defense to square off with Miami transfer

Florida Atlantic’s first-string quarterback will be N’Kosi Perry, a transfer from Miami. He started nine of the 24 games in which he played for the Hurricanes.

Asked what he liked during the Owls’ preseason, Perry said, “I think the overall confidence of the team. I think everyone is buying into what we are doing.”

Much of Florida’s hopes might fall on the defense, which was shredded at times last year. Improving the secondary has been a point of emphasis.

“There’s a bunch of scenarios guys haven’t been in,” Mullen said.

Florida ended up with an 8-4 record last season, moving Mullen’s mark at the school to 29-9. The Gators finished with a three-game losing streak (vs. LSU, Alabama, Oklahoma). Until a 55-20 loss in the Cotton Bowl to Oklahoma, the other three defeats came by a total of 12 points.

Florida opened the past two seasons with No. 8 national rankings, so this preseason projection is slightly downgraded.

The Gators own the longest active Football Bowl Subdivision streak for victories in home openers at 31 games, beginning that string in 1990. During that stretch, they’ve lost just one opener overall at any location.

Florida holds a 3-0 all-time record in the series with Florida Atlantic, though this is the first meeting since the Gators’ 20-14 overtime victory in 2015. The Gators have outscored the Owls by a cumulative total of 120-37 in the three games.

Florida Atlantic coach Willie Taggart is 0-2 vs. the Gators, falling by scores of 40-17 and 41-14 when he was Florida State’s coach.

Taggart is in his second season directing the Owls after posting a 5-4 record last year.

“We have gotten better and I see our guys understanding what we are trying to do,” Taggart said.