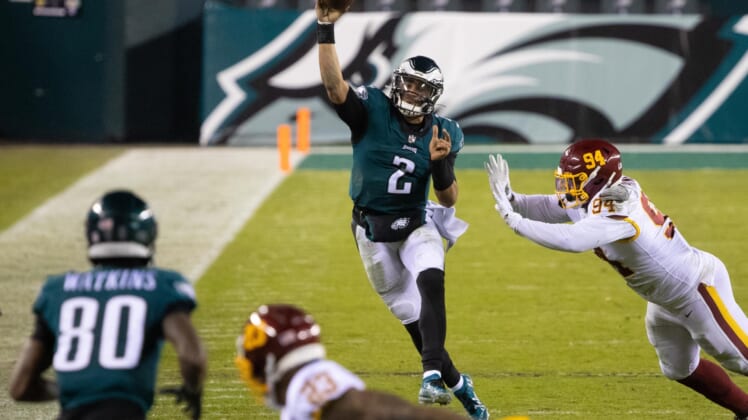 Jalen Hurts will wear the No.1 jersey this season, but the 2020 second-round pick is setting his sights atop the Philadelphia Eagles depth chart and is already making his case to be the franchise quarterback.

Many were surprised last offseason when the Eagles drafted Hurts, widely viewed as a developmental quarterback who needed significant time to grow. But after months of Carson Wentz struggling, the rookie took over as the starter and helped spark sweeping changes in Philadelphia this offseason.

Wentz is now gone and head coach Nick Sirianni was brought in to create a more quarterback-friendly offense. While the Eagles aren’t committing to a starter for the upcoming season, Hurts seems to be putting in the early work and is sending a message to Philadelphia.

“He’s giving off some QB1 vibes right now. I’m told that he’s organized offsite workouts with teammates Dallas Goedert, Miles Sanders and others. He’s spent significant time really absorbing Nick Sirianni’s new playbook. I talked to a coach who was helping Hurts with those workouts. He said that he’s just trying to be a good teammate by picking up all the nuances of the offense, doing a lot of legwork so he can relay that to his new guys and that they can be on the same page, make for a better offensive play system. So, this is a situation where the Eagles got Joe Flacco for insurance, but they feel really good coming out of the draft about Hurts taking ownership of that job.”

Who will be the Eagles quarterback in 2021?

While the Eagles might not be announcing their starter right now, their offseason activity makes it quite clear who will be under center in Week 1. Philadelphia signed Joe Flacco, who played for the New York Jets last season, but he isn’t a legitimate threat for the starting job.

The Eagles also had a great opportunity to draft a quarterback. After trading up for the No. 10 pick, both Justin Fields and Mac Jones were there for the taking. Instead, general manager Howie Roseman drafted wide receiver DeVonta Smith and the franchise didn’t spend any of its nine selections on a quarterback.

Not everyone in the organization is sold on Hurts. He showed flashes in his first season, especially in the upset victory over the New Orleans Saints. But in his final three games, it was evident that he is far from a finished product.

Philadelphia’s offensive line should be a lot better in 2021 and pairing Smith with Jalen Reagor and Travis Fulgham makes the receiving corps stronger. But this still isn’t a great supporting cast and Hurts has a lot of weaknesses this early in his NFL career.

Ultimately, the 22-year-old will see a majority of the starts this season. But with the Eagles projected to be one of the worst teams in the NFL, he might only have the job for a year.