As Derek Carr and the Las Vegas Raiders’ season comes to an end following a 26-19 loss in the AFC Wild Card Round that came down to the final play, discussions will begin regarding its head coach in the next few days and weeks.

Bisaccia, who became the first interim head coach to lead his team to the playoffs in more than 60 years, is expected to interview for the Las Vegas head coaching position.

Any other possible changes will also come, including for Carr, who will enter his final year on his five-year contract next season.

Derek Carr decision could come down to next Raiders’ head coach

With the Raiders expected to become the eighth NFL team to conduct a head coaching search this offseason, whoever Las Vegas selects could affect Carr’s decision to return for 2022.

During the upcoming offseason, Carr and Las Vegas will have a decision with the next head coach to be a factor.

Carr said the job Bisaccia has done to take on in the middle of a season makes him a favorite with Carr as the starting quarterback next season.

“I think we can all think he’s the right guy,” Carr said of Bisaccia after Saturday’s loss to Cincinnati. “Not just one player, not just one side, but everybody. People listen to him and not just people, but our team. All of those things are decisions I don’t get to make.

In a season that saw so much turmoil off the field, in addition to the on-field situations, with Gruden resigning in October, former first-round picks Henry Ruggs III and Damon Arnette being released and former Raiders head coach John Madden passing away, only one player could help steer the ship in the right direction to remain in position to make the playoffs: Derek Carr.

After losing five of six, including 48-9 against Kansas City at Arrowhead Stadium, Carr took the loss head-on as it motivated him to turn the tide back in favor of the Silver and Black for the playoff push with their backs up against the wall. In addition, Carr and the Raiders did not want to have another season where they finished flat in the team’s first season at Allegiant Stadium in front of fans.

With Carr’s leadership, he willed this team to reach the playoffs as the No. 5 seed and play in his first playoff game, despite making a postseason run six seasons ago that was cut short due to injury.

Only the No. 7 seeds in both the AFC and NFC sides of the bracket feature teams with nine victories in Pittsburgh and Philadelphia.

As a result, 12 of the 14 teams in this year’s first season of the NFL playoffs expanding, recorded double-digit wins.

Since the Raiders were 6-7 entering Week 14, Las Vegas has been practically living in a win-or-go-home situation and the 6-foot-3 play-caller has continued to be the epitome of this Raiders team to clinch a spot in the postseason.

First, the Raiders got a two-point win against a COVID-depleted Cleveland team in a game that was pushed back two days. The following week, Las Vegas returned home and won a gutsy 17-13 game against Denver.

Back on the road for the final time of the season, the Raiders kicked off the 2022 calendar year at Lucas Oil Stadium taking on the Indianapolis Colts, who were also in playoff contention. The Raiders were able to contain Colts quarterback Carson Wentz as kicker Daniel Carlson punched in a 33-yard field goal as time expired.

Down to the final game of the 2021 regular season, literally, the Raiders faced the Los Angeles Chargers for a spot in the playoffs in front of a sell-out crowd inside Allegiant Stadium. In a back-and-forth game, Carr led his team down the field for Carlson’s foot to be on display for the second consecutive week to punch their ticket into the playoffs as time expired in overtime. 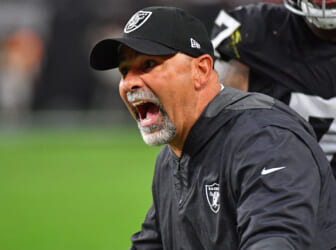 The 30-year-old quarterback, who will turn 31 in March said the 2021 Raiders were unique compared to previous squads.

“That’s the difference in this team than in the past teams I’ve been on,” Carr said. “We have an edge to us and a belief in us that we really can do anything.”

Derek Carr speaking after the game

Whether it is the plays called in the huddle, getting the offense down the field or motivating his teammates – both offensively and defensively – Carr has found a way to help this team be victorious over the last month in order for him to play in his first playoff game on the road against Cincinnati.

With the mindset to finish the season on a high note, Carr said the coaches ultimately gave him and the team the opportunity to be successful and to improve every day as each game passed.

“The fact that that staff kept everything together and kept us competitive and kept us finding ways to win football games, I think that’s what our organization is about,” Carr said. “So, we’ll see what happens. We know what we want to have happen, but again, we’re Raiders. We’re going to play football, but we hope it is for someone special.” 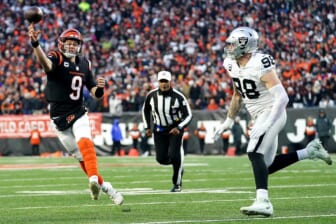