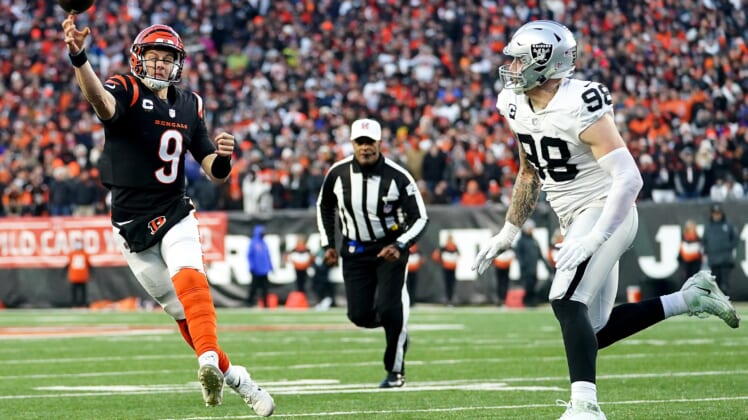 The NFL released an explanation on Saturday night in response to the erroneous whistle in the Las Vegas Raiders vs Cincinnati Bengals game that resulted in a touchdown pass.

Coming out of the two-minute warning, Bengals quarterback Joe Burrow rolled out towards the sideline and threw a pass right before stepping out of bounds. While he got the throw off in mid-air, releasing it before hitting the white chalk, a referee blew the whistle before Tyler Boyd hauled in the touchdown.

While the whistle likely didn’t influence the outcome of the play, NFL rules state a play doesn’t count when there is an erroneous whistle as stated in Rule 6, Section 2 of the rulebook. NBC’s rules expert Terry McAulay confirmed to the broadcast that the touchdown should have been nullified.

“When an official sounds his whistle erroneously while the ball is still in play, the ball becomes dead immediately. If the ball is a loose ball resulting from a legal forward pass, a free kick, a fair-catch kick, or a scrimmage kick, the ball is returned to the previous spot, and the down is replayed.”

NFL rule book on a play being blown dead after an erroneous whistle, via Tom Pelissero

But Jerome Boger’s crew, comprised of the highest-graded referees, allowed the touchdown to stand. As a result, the Bengals took a 20-6 lead and still led 20-13 at halftime.

Senior Vice President of Officiating Walt Anderson told reporters on Saturday night that the touchdown stood because the whistle came after the football was caught.

“We confirmed with the referee and the crew that on that play – they got together and talked º they determined that they had a whistle, but that the whistle for them on the field was blown after the receiver caught the ball.”

Unfortunately for the Raiders, the missed call proved to be the difference. A drive in the closing seconds fell just a few yards shirt with Derek Carr picked off at the 1-yard line. The Bengals won 26-19, with the touchdown proving to be the difference in the game.