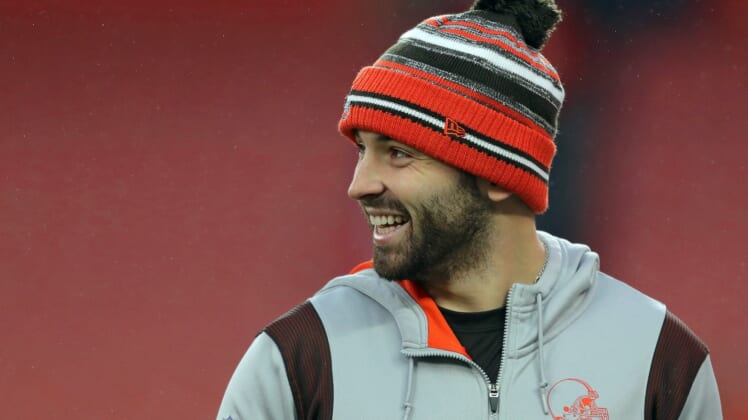 Baker Mayfield doesn’t have a team yet for the 2022 season. The official Cleveland Browns roster may list him as a quarterback, but they have a new QB1 at the top of the depth chart at the Dawg Pound.

Because of the apparent disinterest in the 2018 No. 1 overall pick, some might suggest no one wants him on their team. Robby Anderson of the Carolina Panthers would seem to agree with that mindset. But that isn’t necessarily the case around the league.

According to Aaron Wilson of Pro Football Network, sources suggest there is ‘definite interest in Mayfield around the league’. He adds that this includes teams who might be more inclined to have interest in signing Mayfield once he becomes a free agent in 2023.

Why would teams have interest next year but not now?

The main reason why teams may prefer to wait out the Mayfield market is due to his fully-guaranteed contract for 2022.

Teams don’t want to commit nearly $19 million to a player with so many unknowns. Is Mayfield a problem in the locker room? Might he take issue with being sprung into a competition? How would he handle competing with a rookie? Is he a true leader?

Is Mayfield more of the player we saw during his rookie season, or is he close to a finished product who is still unpolished? Are the Browns at fault for not having a stronger receiving corps, or is Odell Beckham Jr.’s emergence with the Rams further evidence that Mayfield was the issue in Cleveland?

There are many questions surrounding the 27-year-old quarterback. Few teams are willing to part with draft picks, plus take on his full 2022 salary, even if he presents some untapped potential. Is the current perception forming around Mayfield unfair? Absolutely it is.

So far teams have been more willing to link themselves to a potential PR disaster by going after Deshaun Watson a month ago than they have been, simply being rumored as a suitor for Mayfield. It’s a strange stage of the offseason and it has to be even more painful for Mayfield, but at this point, it’s his reality.

Mayfield has had some bad luck in the NFL, having strong seasons every other year since entering the league. Coming off a down season, maybe a team thinks they can find good production heading into 2022. As competitive as Mayfield is, taking a chance on the embattled QB playing with a massive chip on his shoulder seems like a risk worth taking.