The Cleveland Browns and quarterback Baker Mayfield would love to work out a trade for the former No. 1 overall pick before the 2022 NFL Draft. Unfortunately for both parties, a limited market and questions about Mayfield only make an exit more complicated.

Cleveland refuses to cut Mayfield. The front office believes another organization will get desperate at some point for a quarterback and convince itself to absorb a majority of the $18.858 million cap hit he carries for the 2022 season. The Browns are also willing to take things past the NFL Draft, rostering a disgruntled Mayfield.

Mayfield’s recent interview didn’t help matters. The 27-year-old quarterback didn’t erase concerns about his maturity and leadership skills. Combined with his poor performances in 2021 and a hefty contract that is fully guaranteed, NFL teams are concerned.

While many view the Carolina Panthers as a top destination for Mayfield, ESPN’s NFL insider Jeremy Fowler reported Sunday that there is some hesitation in the building. While some identify a buy-low opportunity on a former top pick, others have concerns.

The Carolina Panthers have been implicated here. I believe, after asking around, that they’re torn in that building, that not everybody there believes Mayfield is the guy for Carolina long-term, but he might just end up being the best option of those available.

It’s not like the organization finds itself in an ideal spot. The Sam Darnold trade backfired and while NFL executives believe Carolina drafts a quarterback with the No. 6 pick, no one believes the front office would feel good about the pick. 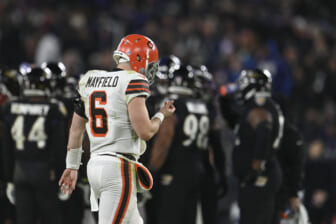 Another potential landing spot is the Seattle Seahawks. However, the franchise just re-signed Geno Smith and there is a belief in the building that quarterback Drew Lock offers some upside. Seattle’s front office would prefer to draft a quarterback, only considering Mayfield if the price dropped extremely low.

“Seattle still looms here; they kind of, sort of moved on by re-signing Geno Smith. They’ve got Drew Lock, they’re looking for a developmental quarterback in the draft. But if the price is low or if Mayfield is released outright, then maybe they get involved.”

While Mayfield might be one of the most confident quarterbacks in the league, it’s evident NFL teams are far more skeptical about his talents and fit on their rosters.

Why NFL teams have concerns with Baker Mayfield

There are a number of issues teams and some players seem to have with Mayfield. Robby Anderson, one of the Carolina Panthers top receivers, made it clear he doesn’t want Mayfield throwing him passes. Considering that’s a player who has spent several years trying to make things work with Darnold, it speaks volumes.

It’s not Mayfield’s only problem. While fans might have found it interesting when Mayfield shared how he played through painful injuries, many teams see it in a different light. Organizations view it as providing an excuse for his poor play and coaches don’t like players revealing information that could hurt a team’s competitive advantage during a season. Between all of that and his reputation in front of cameras, it’s not what some teams want from an average starter in a leadership position.

All of it could be put up with easily if Mayfield performed at a high level. While his box score stats looked fine in 2021, his play on film and his advanced numbers show a bad quarterback in clutch moments.

Situationally, Mayfield posted a 57.3 quarterback rating on third downs and only completed 50.5% of his passes this past season. Those are alarming trends in a league where passers often need to carry teams in crucial moments of the game.

All of that doesn’t justify a guaranteed $18 million salary. Until the Browns agree to eat a majority of the contract or Mayfield goes silent, he might be stuck in Cleveland. It’s also why a deal might not happen until weeks after the NFL Draft is over.