Cleveland Browns quarterback Baker Mayfield revealed on Wednesday that he was pushing his pain threshold to some serious limits during much of the 2021 season.

Mayfield dealing with a shoulder injury throughout last season is common knowledge for those who closely follow the Browns and the NFL. But, since the issue was in his non-throwing shoulder he doesn’t get much slack from fans after his performance last year was his worst season yet. And the team finished with a disappointing 6-8 record in the 14 games he played in.

However, during a recent guest spot on the “Ya Neva Know” podcast, the 27-year-old revealed how bad his shoulder really was during the season. And the fact that he not only tore most of his labrum ligaments in his but also fractured a major bone while trying to play through the injury.

“So I tore my labrum completely, like full front and like basically 90 percent in the back,” Mayfield explained. “That was Week Two. I did that in the first half. Played the rest of the game, I was fine. . . Four weeks later, we were playing the Cardinals, and I dislocated my shoulder again. But I dislocated it so bad and at a different angle, that the bone — like the humerus that goes up into your shoulder socket — the big bone right here [that] comes up into your ball and socket and it forced its way out.

“And I fractured the bone because it wasn’t gonna be a clean exit,” he added. “So I fractured the bone. So when I had the labrum done and that fracture, the inflammation, and everything, I had no function in my left shoulder. And we were going into a Thursday game that week. Monday, I couldn’t lift my arm. When I couldn’t raise my arm, I was like, ‘I can’t do this.'”

Following the fracture against the Cardinals, it is unsurprising that the team would go 5-6 in the last 11 games of the season. When looking at things from the surface level, it’s understanding why fans would knock Mayfield and his play last season. However, it’s also easy to imagine how much an arm that was difficult to lift would hamper throwing motion and accuracy as 300-pound athletes looked to drive the QB through the turf.

Mayfield dealt with a great deal of physical pain in 2021 but has confronted an almost equal amount of mental frustration as the Browns have publicly moved on from him this offseason by pursuing and landing embattled former Houston Texans star signal-caller Deshaun Watson. It is still unclear if the Oklahoma alum will be wearing orange-and-brown next season or not. 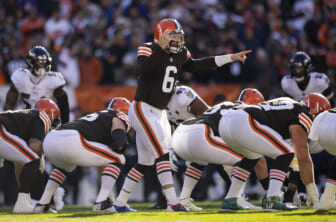 Also Read:
Baker Mayfield has ‘no clue’ which team he’ll play for in 2022, feels disrespected by Browns