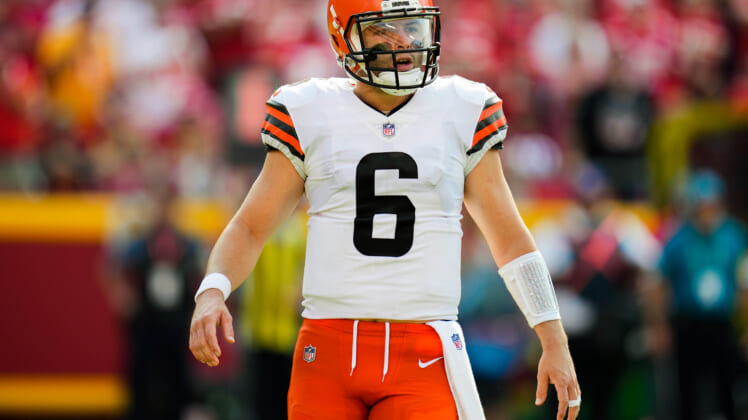 The Cleveland Browns and quarterback Baker Mayfield both want the former No. 1 pick on a new roster as soon as possible. Unfortunately for the two parties, it seems the NFL trade rumors and uncertainty won’t come to an end anytime soon.

Mayfield requested a trade the minute Cleveland met with quarterback Deshaun Watson. After acquiring the Pro Bowl quarterback and seemingly taking a shot at Mayfield’s character in the process, it added tension between the two parties.

Once the face of the franchise as the No. 1 pick in the 2018 NFL Draft, Mayfield is now on shaky ground in Cleveland. The team no longer wants him but it might also need him if Watson receives a lengthy suspension for 22 civil suits alleging sexual misconduct. However, the Browns also want to dump Mayfield’s $18.8 million cap hit and that can only be accomplished through a trade.

According to Jeff Howe of The Athletic, there is nothing imminent on a Mayfield trade. In fact, it now reportedly wouldn’t surprise people in the NFL if Mayfield remains on Cleveland’s roster past the 2022 NFL Draft at the end of April

The Browns don’t have many options. With the Carolina Panthers seemingly not interested in Mayfield and numerous other teams already addressing quarterback, it creates a real problem. Ultimately, it shouldn’t be a surprise that this saga could drag out even longer.

All of this can be tied back to the 2021 NFL offseason. Cleveland didn’t feel confident enough in Mayfield to sign him to a contract extension, a deal worth $30-plus million per season. However, the franchise also saw enough to pick up his guaranteed $18.858 million salary on the fifth-year option of his rookie contract. A year later, the Browns can’t find anyone willing to take on the entire contract and it’s standing in the way of a deal.

Cleveland has no leverage in this situation. Any team with a genuine interest in Mayfield can be patient, waiting to see if the quarterback agrees to a buyout with the Browns. Otherwise, the Browns will need to eat a portion of Mayfield’s salary for a trade to happen.