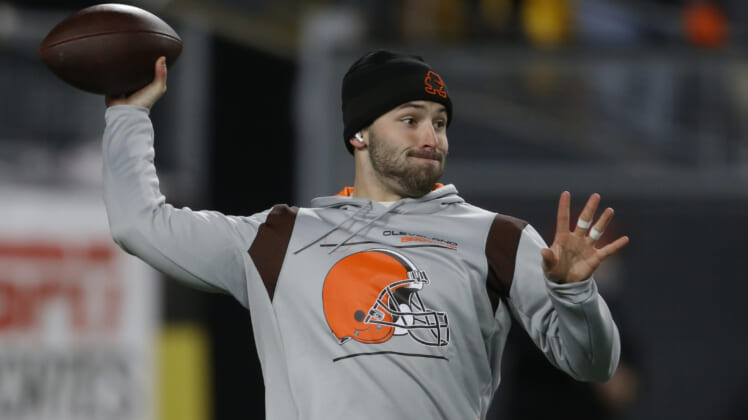 While multiple NFL teams are interested in quarterback Baker Mayfield under the right circumstances, the evaluation of the Cleveland Browns’ former starter reportedly isn’t very favorable around the league.

Mayfield, the No. 1 pick in the 2018 NFL Draft, is looking for an opportunity outside of Cleveland. The Browns went into the offseason wanting to find a better starting quarterback and they found it, acquiring Deshaun Watson.

However, both sides are now in a tricky situation. Cleveland refuses to outright release Mayfield a year after fully guaranteeing his $18.8 million salary for the 2022 season. At one point this offseason, the Browns reportedly wanted a top pick for Mayfield.

The asking price and contract have driven teams away, but it’s not the only issue. Even if Mayfield becomes a more affordable option, the consensus on his talent around the NFL isn’t particularly high.

According to Albert Breer of Sports Illustrated, Mayfield is viewed as a ‘bottom-half-of-the league starter’ by NFL evaluators.

Why NFL teams are low on Baker Mayfield

The sentiment on Mayfield around the league shouldn’t be too surprising. While he’s a popular quarterback among a large section of NFL fans, there are plenty of factors working against the young signal-caller.

For one thing, coaches and executives likely take issue with the commercialization of Mayfield and his personality. Between the strange goodbye letter to Cleveland and the number of commercials he is featured in, it’s potentially viewed as excessive for a quarterback without a strong NFL resume.

There are also questions about his decision-making when playing. He suffered the shoulder injury that bothered him all year when he attempted to make a reckless tackle after throwing an interception. Beyond the durability worries, his advanced numbers are troubling.

Situationally, Mayfield posted a 57.3 quarterback rating on third downs and only completed 50.5% of his passes this past season. Those are alarming trends in a league where passers often need to carry teams in crucial moments of the game.

Mayfield still has enough talent to be a starting quarterback in a league where Mitch Trubisky, Drew Lock and Sam Darnold might play 10-plus games in 2022. Unfortunately, that is a low bar too clear and isn’t a great outcome for the former No. 1 pick.