Texans QB Davis Mills to be Year 2 stand out, a look at why

Davis Mills hardly cracked into the top-10 of most analysts’ quarterback rankings ahead of the 2021 NFL Draft, but he’s shown he deserved to be a third-round selection at No. 67 overall with his performance at the next level.

Mills, behind New England Patriots quarterback Mac Jones, had the best season of any rookie signal-caller in 2021, and he did it against the odds. Mills was thrown into the fire in Week 2 after Tyrod Taylor suffered a hamstring injury in Houston’s 31-21 loss to the Cleveland Browns.

It wasn’t easy going for the former Stanford passer at first, who started his career off with a nine-game losing streak in the games he saw action in, ultimately leading the team to a pair of victories between a 30-16 win over the Jacksonville Jaguars and 41-29 victory over the Los Angeles Chargers. He completed 66.8% of his passing attempts for 2,664 yards with 16 touchdowns and 10 interceptions.

The overall finish to the season record-wise isn’t a pretty one, but quarterback wins are not a stat and it should be taken into consideration that not only was Davis Mills a rookie in a disadvantageous situation, he was one on a team that was devoid of true talent at nearly every position – and there are bright spots worth noticing. 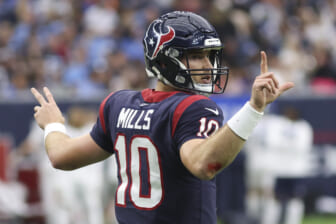 In the final five-game stretch of the season, Mills put up 1,258 passing yards with nine touchdowns to two interceptions, showing increased comfort in the pocket and seeming to come into his own more with time.

It was during that time period the Texans got the two wins against the Chargers and the Jaguars and Mills put on perhaps the best performance of his NFL career in the season finale against the division rival Tennessee Titans when he completed 23-of-33 passes (69.7%) for 301 yards with three touchdowns on an interception-free outing – and he did it against a top-10 NFL defense.

By that point in the season, Mills was pushing the ball down the field with a lot more ease than before, and that’s reflected both in the film and on the stat sheet.

According to Pro Football Focus, Mills had the highest passer rating on deep throws of 20-plus among NFL quarterbacks with a grade of 120.3 in the area. That put him directly ahead of the likes of Kyler Murray (Arizona Cardinals, 117.0 ), Justin Herbert (Los Angeles Chargers, 115. 4), and Patrick Mahomes (Kansas City Chiefs, 114.2).

Mills’ improved accuracy at all levels of the field was clear to see, as was an underrated sense of mobility and ability to evade pressure that Mills always possessed but was often knocked for in the pre-draft process.

That’s why he put stress on going through mobility drills ahead of the draft, and it’s unsurprising that we didn’t see a whole lot of Mills moving around in college – Stanford’s West Coast offense didn’t demand that of its quarterbacks.

On top of all the tangible improvements Mills was commended for, he’s also received great praise for the intangibles. His teammates have nicknamed him “Zuckerberg” because of how high his football IQ is and how intelligent he is overall, which isn’t shocking considering he graduated from Stanford, after all.

Houston Texans Head Coach Lovie Smith has expressed nothing but confidence in Mills moving forward, saying the improvement from Year 1 to Year 2 for a quarterback is usually a big one and that he believes that’s what Houston will get from Mills.

“If you look at all of my comments about Davis, I am a believer in him and what he’s going to do. Eventually, he’s got to do it all on the football field consistently where everybody loves him, every snap and all of that. Before a guy has played enough to do all of that, he shows up every day. Availability, he is available, and he has recruited other players to come here, and what the guys see him doing is just working.

When I say I believe in him, (offensive coordinator) Pep Hamilton, second year in the system, all of these things. … If you just go back and look at the plays that he made, throwing the ball downfield last year, so many good things that he did, and that’s as a rookie.”

On top of the potential Mills has shown and the way he adjusted well during the season, the way the Texans drafted in April should allow the quarterback to reap some solid benefits. Regardless of what a quarterback brings to the table or how high his ceiling is, he cannot be successful and run the offense to its maximum potential without adequate protection and efficient weapons to put the ball in the hands of. 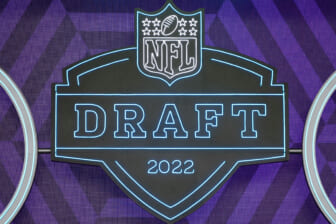 Green is an instant plug-and-play offensive lineman who brings a high level of versatility as the only player in the FBS who played at least 75 snaps at left guard, left tackle, right guard and right tackle, checks the box on size at 6-foot-4 and 323 pounds and has an impressive amount of athleticism. Taking Deculus in the sixth round gives Houston depth with an experienced piece who could function as a swing tackle after playing in 61 games for LSU as a four-year starter.

Metchie was an important contributor for the Alabama offense in 2021, reeling in 96 receptions for 1,142 yards with eight touchdowns, a level of production the Texans will hope to see translate to the next level after showing a need at slot receiver.

Between the acquisition of Metchie, the team extending wideout Brandin Cooks and second-year receiver Nico Collins having the potential to take a big step in 2022 if he beats out former Denver Broncos wide receiver Desean Hamilton for the outside position on the other side of Cooks. There’s a lot to like about Collins, who has the edge where overall skillset is concerned and has a height advantage at 6-foot-4.

Between Cooks, Collins and Metchie, Mills figures to be in a much better situation as far as having a selection of reliable pass-catchers. Outside of wide receiver, the Texans get deeper at tight end with Quitoriano, who had 19 receptions for 214 yards with three touchdowns and has shown how much of an impact he can make as a run-blocker.

He joins a tight end room that is expected to be led by Brevin Jordan and includes Pharaoh Browns and Antony Auclair. This was a wise pick by Houston, with tight end Jordan Akins parting ways during free agency and Quitoriano is sure to keep things interesting in competition.

His ceiling could prove higher than expected under new offensive coordinator Pep Hamilton, who spent time in a tight end-driven offense at Stanford, so he’s no stranger to working with them in a high capacity or prioritizing the position within a scheme.

Adding a rusher in Pierce should help open up what was a dismal Texans run game last year, so long as the offensive line makes the strides it is expected to. Houston averaged just 3.4 yards per rush last season (worst in the league) and totaled a mere eight rushing touchdowns (tied for worst in the league). Having a more successful run game will open up the offense more and ultimately make things easier on Mills.

There are obviously still some question marks surrounding the Texans as a team and a lot of potential that must be tapped for them to take the next step this season, but they’ve put Mills in as good of a situation as can reasonably be done here and he’s shown the makings of a quarterback who could become a reliable long-term starter.