Titans wrap up AFC’s top seed by turning back Texans 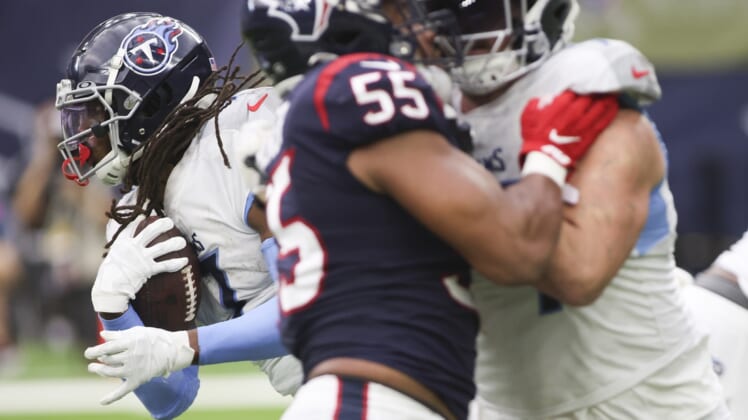 Ryan Tannehill tossed four touchdown passes and the Tennessee Titans held off the host Houston Texans 28-25 Sunday to lock up the No. 1 playoff seed in the AFC.

The Titans finished the regular season 12-5, tied with the Kansas City Chiefs atop the conference. Tennessee earned the top seed, which means a first-round bye and home-field advantage throughout the AFC playoffs — by virtue of a head-to-head win over the Chiefs.

Julio Jones caught his first touchdown pass as a member of the Titans during the fourth quarter, giving them a 10-point lead, enough room to survive Houston’s budding comeback. The Titans squandered most of a 21-0 halftime lead.

The Texans fell to 4-13 to wrap up David Culley’s first year as head coach despite Davis Mills’ 301 passing yards and three touchdowns. Danny Amendola caught two scoring passes in the fourth quarter and finished with 113 yards on seven receptions.

Houston’s comeback was made possible by its defense forcing the Titans into three straight three-and-outs to start the second half. But that didn’t last forever, as Tannehill led a 75-yard drive ending in Jones’ 3-yard touchdown catch that grew their lead to 28-18.

Mills responded by hitting Amendola for a 26-yard touchdown with 4:04 to play. But the Titans managed to run out the clock from there.

Tannehill finished 23-for-32 for 287 yards, and four of his teammates finished with at least 50 yards receiving.

After a first quarter comprised of three punts and a missed Tennessee field goal, the Titans broke through with an 11-play, 94-yard scoring drive in the second. Tannehill hit tight end Anthony Firkser for a 5-yard touchdown on third and goal.

The Titans’ next drive covered 85 yards in just 2:46 and culminated in Tannehill’s 14-yard touchdown pass to A.J. Brown with 1:34 left in the half. Brown caught three passes for 52 yards on the drive.

Tennessee forced Houston to punt for the fifth straight drive and took one more crack at the end zone. The Texans incurred a 45-yard pass interference penalty to set up the Titans on the 4-yard line, and Nick Westbrook-Ikhine caught a touchdown on the next play for a 21-0 halftime lead.

The Texans gained just 67 yards in the first half, but they returned to the field with their bag of tricks. Mills pulled off a flea-flicker and hit Chris Moore for a 28-yard passing touchdown on their opening drive of the third quarter.

Houston tacked on a 31-yard Ka’imi Fairbairn field goal late in the third.

Mills hit Amendola for a 37-yard catch over the top to get the next drive going, and the rookie again found Amendola wide-open in the back of the end zone for a 7-yard score. Amendola caught a pass for the two-point conversion, as well, bringing it to 21-18 with 11:40 left in the game to set up a nerve-wracking finish.