The 3 players on the Dallas Mavericks roster ruining their defense 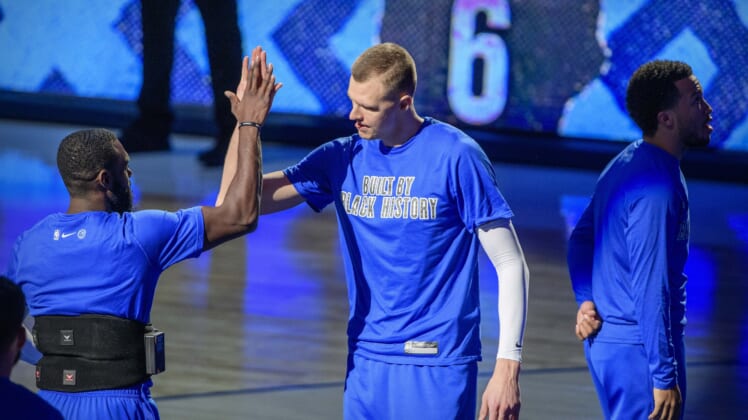 After an ugly 87-78 win over the Oklahoma City Thunder on March 3, the Dallas Mavericks snuck into the eighth seed of the Western Conference. This run towards a playoff spot has been led by one of the best offenses in the league. However, defense is a concern, with the Mavs ranked 24th in defensive rating. For Dallas to be true contenders, these three players need to step up defensively.

The Mavericks traded fan favorite Seth Curry for Josh Richardson and a second-round pick that became Tyler Bey. This move signaled a change in philosophy for Dallas. Instead of out gunning teams every night, the Mavericks wanted a player to guard the opposing teams’ best player. Unfortunately, Richardson has fallen below expectations.

Guarding the Damian Lillards and Steph Currys of the league isn’t easy, but Richardsons’ defensive rating 115.8 per 100 possessions is abysmal. The Dallas Mavericks pick and roll defense forces Richardson to switch onto big men and the team is getting crushed. Dallas has bigger defensive problems in the next two players, but Richardson has been a disappointment this season.

Since rupturing his achilles last season, Dwight Powell hasn’t looked the same. Known for being one of the best rim runners in the league, Powell’s athleticism and bounce have both taken a clear step back. His struggles are most noticeable on defense.

Already an undersized center, Powell doesn’t offer much as a rim protector. He often sits back to stay in front of the attack, allowing shooters ample space for easy buckets. With Kristaps Porzinigis at the center and Powell playing power forward, the Canadian is a little better, but doesn’t offer much more than Josh Johnson, Josh Green, and other Mavericks bench players.

With his contract now looking like an overpay, there’s not a huge trade market for Powell. Dallas should give guys like Green a chance to take his minutes.

While Porzingis has been effective on offense, the Latvian has struggled to find his role in the Dallas Mavericks defense. The pick and roll has been killing Dallas this season and it’s mostly due to Porzingis. On most pick and rolls, Porzingis drops into the paint, allowing open mid-range shots. If Porzingis switches on to the guard, he’s not quick enough to keep up and the ball-handler will blow past him to the rim.  Until Porzingis and the Mavericks figure out how to defend a simple pick and roll, their defense will not improve.

And it’s not just the pick and roll. Porzingis is putting up 1.6 blocks per game, a career low. While he’s never been the best defender, Porzingis has made up for any deficiencies with elite rim protection. That’s simply not happening this season. Dallas has to hide Porzingis on defense and hope to get rim protection from Maxi Kleber or Wilie Cauley-Stein. On a team led by Luka Doncic, the Mavericks can’t afford to have a second All-Star caliber player with subpar defense.

Like everything with Porzingis, these problems come down to injuries. He came back from an injury in January and may still be playing himself into game shape As the season progresses, will Porzingis develop more confidence in his body, becoming a better defender? It’s difficult to say. If he doesn’t, the Mavericks need to consider trade possibilities.