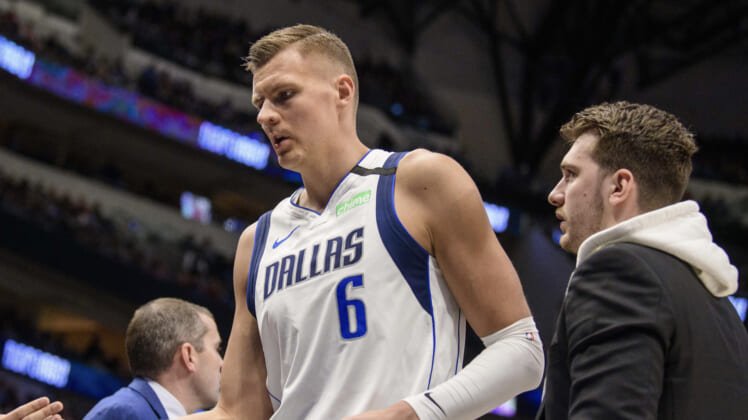 The Dallas Mavericks have dealt with numerous injuries throughout the 2019-20 season. That includes stars Luka Doncic and Kristaps Porzingis missing time.

Unfortunately for the Mavericks, the injury bug has come back to hit them at the worst possible time. The Mavericks on Friday announced that star forward Kristaps Porzingis has been playing with a torn meniscus in his knee. They also provided an update on his status.

Kristaps Porzingis to miss remainder of first round

This is just horrible news for the Unicorn and his team. Playoffs included, Dallas has posted a 12-8 record in games that Porzingis has missed. The team is 33-26 in games he’s suited up in. However, the idea of Dallas having to play the remainder of its first-round series against the Los Angeles Clippers without Porzingis and with Doncic’s ankle ailing him is not great news.

Prior to a blowout 43-point loss to Los Angeles in Game 4 this past Tuesday, the Mavericks had been playing competitive ball against the second seed in the Western Conference. At issue in that game was a lack of defense and an inability of other players to step up behind Doncic.

Porzingis has missed each of the past two games with this injury. Dallas is minus-41 in those games. The team as a whole was plus-five with the former lottery pick on the court over the first three games of the series.

After a three-day delay in action, the NBA will resume its playoffs this weekend. Dallas takes on Los Angeles in Game 6 of their series Sunday afternoon down 3-2.