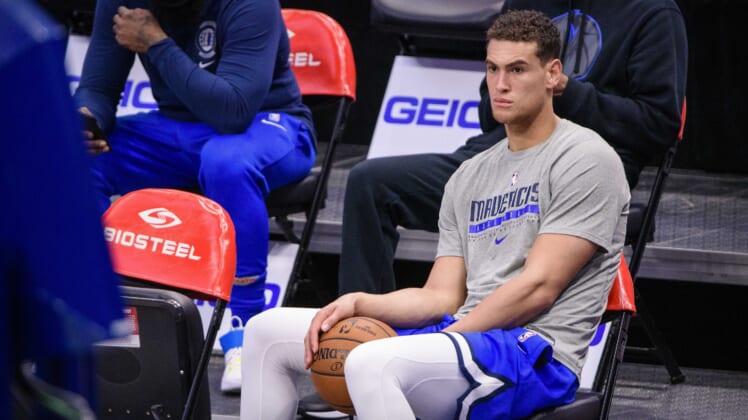 After seven seasons with the Dallas Mavericks, it’s clear Dwight Powell’s time with Dallas is coming to an end.

Head coach Rick Carlisle gave Powell time during the team’s COVID-19 crisis, but he hasn’t cracked the rotation in two of the last three games. The Canadian doesn’t look the same since his Achilles injury last January, so his trade value is hard to judge. Here’s five trades the Mavericks should try to make.

Dwight Powell and Tim Hardaway Jr. to the Cleveland Cavaliers for Andre Drummond and Cedi Osman

The Mavericks are one of the worst rebounding teams in the NBA. One look at their bigs and it’s easy to see why. Kristaps Porzingis is functionally a 7’3” shooting guard, Willie Cauley-Stein can be brushed off by most centers, and Boban Marjanovic is too much of a defensive liability to get real minutes. Trading for Andre Drummond would immediately fix the Mavericks rebounding issues.

Since arriving in Cleveland for a second round pick, Drummond has continued to be one of the best rebounders in the league. In fact, his 14.6 boards per game lead the league this season. Drummond is never going to be able to shoot threes or switch on defense successfully — traits Carlisle prioritizes — but desperate times call for desperate measures. The Mavericks are certainly desperate.

After acquiring Jarret Allen and Taurean Prince as part of the James Harden trade, the Cavaliers suddenly have an excess of big men. Allen is clearly the center for the future, making Drummond expendable. With a surprising start, Cleveland may be looking at moves that will push them towards the playoffs. Powell can play backup minutes on a cheaper contract while Hardaway Jr. gives the Cavaliers much needed bench offense. Cleveland would be better offensively and have a real shot at making the play-in tournament.

Cedi Osman is behind Isaac Okoro in the rotation, so the Mavericks should be able to snag him as part of the trade. He adds more shooting, as well as being good friends with Luka Doncic. Extending Drummond will be a tough decision for Dallas, but he’s at least worth the half season rental.

Dwight Powell to the Brooklyn Nets for Spencer Dinwiddie

At first glance, this trade seems ridiculous. Powell isn’t playing in a mediocre Mavericks big man rotation and Spencer Dinwiddie is a versatile guard, coming off of a career year. However, Dinwiddie tore his ACL in the third game of the year, ruling him out for the rest of the season. With his player option due this summer, Dinwiddie is likely to test free agency.

The Brooklyn Nets have so much money tied up in Harden and Kyrie Irving, it’s unlikely they’ll be able to afford a third guard like Dinwiddie. In win-now mode, the Nets could use Powell to bolster the big man depth they lost in the Harden trade.

For Dallas, they’d be getting off Powell’s contract and have the first option to re-sign Dinwiddie. The Mavericks offense has struggled without a secondary playmaker and Dinwiddie is the type of guard they’ll target in free agency anyway. Despite losing a player for this season in Dinwiddie, the long-term reward of signing him would be worth the short-term setback.

Despite adding Tristan Thompson in the offseason, the Celtics still haven’t solved their big man issues. With a core four of Kemba Walker, Marcus Smart, Jayson Tatum, and Jaylen Brown, the Celtics are a center away from a dangerous lineup. With the largest trade exception in league history, Boston will be buyers at the trade deadline.

However, the Celtics don’t have the assets for the big targets like Bradley Beal, so they’ll have to settle for someone like Powell. He would give them a high energy center who can stretch the floor and be a good presence in the locker room.

In Carsen Edwards, the Mavericks would be buying low on someone who’s shown flashes of good three point shooting. Dallas is currently the worst three point shooting team in the league, so a flyer on Edwards would be worth pursuing. Edwards is currently in the G-League, so the Mavericks may be able to demand a second round pick. This isn’t the most exciting trade — certainly Celtics fans had bigger hopes for the trade exception — but both Boston and Dallas would improve.

The Thunder have been clear about their intentions — anyone on their roster is available for a pick. While Powell and a second round pick won’t attract many offers, the Thunder would be willing to part with an expiring veteran like Trevor Ariza.

Ariza is in a similar position as Andre Iguodala was in Memphis last season. He’s waiting to be bought out or traded away. Unlike Iguodala, Ariza won’t command much on the market. He’s 35 and hasn’t played more than 70 games since the 2016-17 season. However, Ariza is a career 35.2% three point shooter and is a championship-winning veteran. Factor in his expiring contract and Ariza is the exact kind of player the Mavericks will target in a Powell trade.

Powell would get an opportunity to rebuild his value with low expectations. He could be the first big off the bench or even start next to Al Horford. The Thunder would add another asset on a team controlled contract they could move at any time.

Dallas is struggling right now and clearly need to make changes. Moving on from Dwight Powell should be the first of many moves explored by the front office.