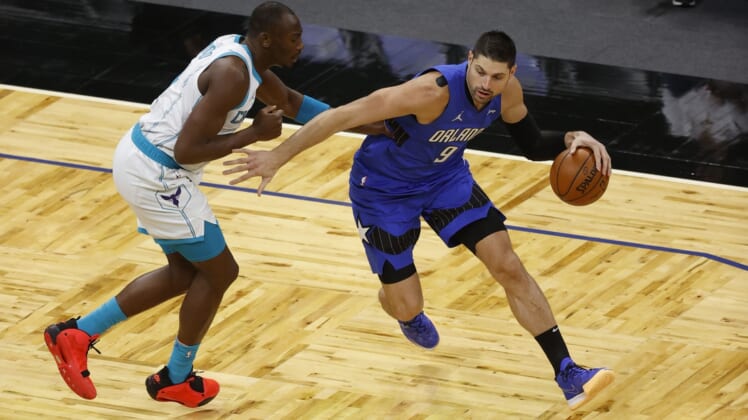 Despite boasting two stellar young stars, the Boston Celtics simply have not lived up to expectations this season. Fresh off a narrow win over the scrappy Golden State Warriors earlier in the week, Boston sits at a mere 11-9 and as the fourth seed in the Western Conference.

It has led to Celtics rumors indicating that general manager Danny Ainge might look to pull off a major deal before the NBA trade deadline in March.

“I think (that) the sweet spot is latter March,” Ainge said on Thursday. “I mean, we could do it now if we could make a good deal. But the challenge is anything you could do to incrementally change your team might be able to be done shortly here within the next week or two but are you passing up a chance that something comes along down the road that would be even better? That’s what we have to identify.”

Boston has assets in terms of draft picks and young players to offer up. It also has some matching salaries that could lead to a notable trade as well as a huge trade exception. Below, we look at four Celtics trade scenarios that could help stars Jaylen Brown and Jayson Tatum moving forward.

This is a move that would make a whole lot of sense for Boston in that it needs more depth at point guard. The recent injury to Marcus Smart underscores this in a big way. While he’s no longer the MVP-caliber player we saw eons ago, the 32-year-old Rose can still be a solid contributor. He’s averaging 14.2 points and 4.2 assists on 43% shooting for the rebuilding Pistons this season.

A move to acquire Rose would likely cost Boston its first-round pick in 2021 and a young player. Perhaps, someone like Carsen Edwards could make sense. Romeo Langford could also be thrown in to make the contracts work with that first-round pick turning into a second-rounder.

Remember, Boston has the $28.5 million trade exception stemming from the offseason sign-and-trade with the Charlotte Hornets surrounding Gordon Hayward. That’s an absolutely huge asset to have. It is also highly likely that Ainge and Co. are going to use said exception, although, it could come this summer.

If the Celtics were to use it in-season, Bledsoe would make the most sense. He was acquired by the New Orleans Pelicans in the Jrue Holiday blockbuster with the Milwaukee Bucks. More than anything, that was to help make the salaries work. The 31-year-old Bledsoe has no long-term future in Nola. Here, Boston offers up a 2021 first-round pick and future second-round pick to the Pelicans for Bledsoe. In turn, the Celtics sell high on Marcus Smart to recoup some of the lost draft assets.

There’s also an outside chance that Boston looks for another big. Celtics rumors have pointed in this direction since the failed Enes Kanter experiment. Using the above-mentioned Hayward trade exception, Boston takes on Aldridge’s expiring contract for the stretch run. Honestly, it just makes too much sense.

Sure the 34-year-old Aldridge is nowhere near the All-Star caliber player he was earlier in his career. That’s fine. He can still contribute for a contending team and would be an upgrade over the “Williams brothers.” Aldridge is averaging 14.1 points and 4.3 rebounds. Perhaps, sending one of those young Williams’ bigs to San Antonio and a future first-round pick could get this done.

This could be one franchise-altering trade for Boston. With the Magic going nowhere fast and likely headed for a full-scale rebuild, trading their best player at the height of his career could make a ton of sense. Vucevic is averaging 22.5 points, 11.2 rebounds and 3.5 assists while shooting 48% from the field this season. He’s also expanded his game to the three-point line. That’s no small thing in today’s NBA.

In order to pull off a move of this ilk, Boston would have to give up a ton of assets. That’s magnified by the fact that Vucevic is under contract for two more seasons beyond the 2020-21 campaign. It’s in this that moving Kemba Walker as a financial piece wouldn’t be nearly enough. Stud rookie Aaron Nesmith and Romeo Langford would likely have to be included. That doesn’t even take into account the multiple first-round picks Orlando would demand. Even then, Vucevic would be a major upgrade over Daniel Theis at center. This would also preserve Boston’s trade exception for the summer.