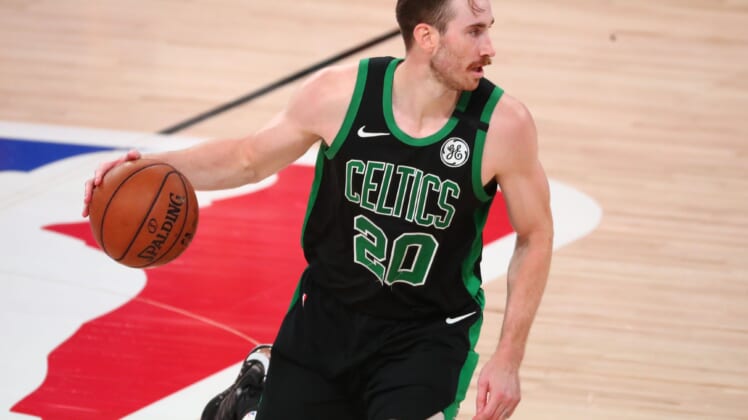 The Charlotte Hornets are signing forward Gordon Hayward to a four-year contract worth $120 million, stealing him from the Indiana Pacers and New York Knicks.

When NBA free agency opened on Friday night, many expected Hayward to land with the Pacers in return home. With sign-and-trade talks with the Boston Celtics seemingly going poorly, Hayward jumped at the chance to sign a lucrative contract.

Hayward exercised the opt-out clause in his contract with Boston on Thursday, turning down the $34.2 million he would be owed for the 2020-’21 season. While the decision surprised some, the 2017 All-Star selection just landed a superior contract on the open market.

According to ESPN’s Adrian Wojnarowski, Hayward is signing a four-year agreement worth $120 million, and his agent has confirmed the deal. While the Hornets only have $20 million in cap space right now, they have a few options that will create the necessary space for Hayward’s deal.

Many expected the 30-year-old to sign with the Pacers, who offered a four-year pact worth $100 million. Hayward played at Butler and grew up in Indianapolis, with a well-known desire to return to his home state.

However, Indiana could only acquire him in a sign-and-trade deal with the Celtics. The Pacers offered to send center Myles Turner back to Boston, but Danny Ainge reportedly insisted on acquiring Turner and Victor Oladipo. Talks seemingly broke down, and the Celtics will now lose Hayward for nothing.

He started 52 games for Boston this past season, averaging 17.5 points, 6.7 rebounds, and 4.1 assists per game. Playing a complementary role to Jayson Tatum and Jaylen Brown, Hayward wanted an opportunity to be more of a star with a new team.

Michael Jordan landed his franchise point guard in LaMelo Ball and is now building around him. With the deal signed, Hayward becomes the seventh-highest-paid small forward in the NBA, just behind Paul George ($34.2 million).

Under Jordan, the Charlotte Hornets have become known for handing out baffling contracts. Among the recent gaffes, now some of the worst deals in the NBA, Terry Rozier (three-year, $58 million) and Nicolas Batum (five-year, $120 million contract).