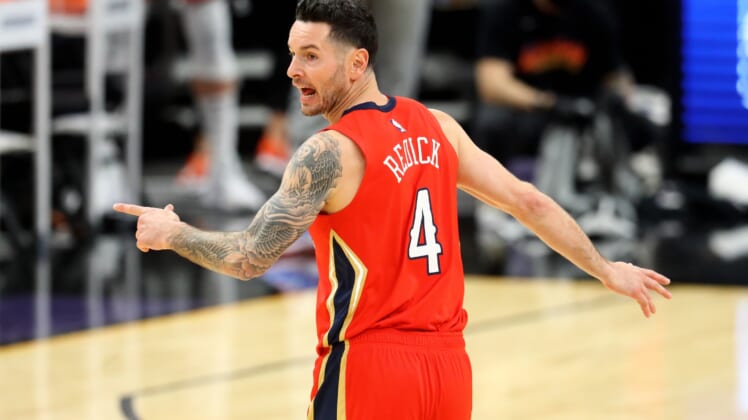 We have already heard the NBA rumors suggesting that a struggling New Orleans Pelicans team could move Lonzo Ball and JJ Redick. It makes sense. The team sits at 7-11 on the season and needs to find the right mix to couple with Zion Williamson and Brandon Ingram.

With the NBA trade deadline now less than two months away, talk around the watercooler is heating up as it relates to a potential Redick trade from the Pelicans. Three Eastern Conference contenders are among those being bandied about.

According to Shams Charania, these three teams are in on the veteran sharpshooting guard.

“As Feb. 2 looms as the NBA’s deadline for teams to aggregate acquired players in a trade later, the New Orleans Pelicans have focused on the Philadelphia 76ers, Brooklyn Nets and Boston Celtics as potential trade destinations for JJ Redick,” the NBA insider reported.

As noted, Feb. 2 is the deadline for teams that added players this past offseason to aggregate them in trades. Until then, it must be a player-for-player swap without any other moving pieces. By moving the 36-year-old Redick before Tuesday, the Pelicans’ options are more widespread.

A first-round pick of the Orlando Magic back in 2006, Redick is in the midst of a down season. The former Duke star is shooting a mere 30% from three-point range. That’s alarming given that he’s a career 41% shooter from distance.

Even then, NBA rumors linking Redick to contenders make sense. Historically, Redick has proven to be an important cog from out on the perimeter. Struggles through the first 16 games of the 2020-21 season doesn’t change that.

NBA rumors: How might a JJ Redick trade look?

Counting $13 million against the cap in the final year of his current contract, Redick is a valuable commodity. Not only can he provide that outside shooting ability, a contending team can entice New Orleans with a longer-term contract and draft pick compensation in return.

After recently acquiring James Harden, the Nets could offer up injured guard Spencer Dinwiddie and multiple second-round picks. Boston has more options in that it can entice the Pelicans with a 2021 first-round pick and studly guard Marcus Smart.

Redick also played for the 76ers from 2017-19, meaning that there’s a built-in relationship there. Perhaps, salary fillers such as Mike Scott and Terrance Ferguson as well as young guard Shake Milton could get something done.