The stage is set for the final game on NFL Wild Card Weekend with the Dallas Cowboys and Tampa Bay Buccaneers battling for a spot in the Divisional Round.

We’ve already seen a Cowboys vs Buccaneers game once this season. Sunday Night Football went to Dallas in Week 1 and a national audience watched Tampa Bay cruise to a 19-3 victory. However, that happened four months ago and both these teams are now in very different spots.

What makes this game unique is that neither of these clubs is playing their best football right now. Tom Brady just experienced a losing season for the first time in his career, while McCarthy is on the hot seat coming off a difficult month for Dallas.

Let’s dive into our Cowboys vs Buccaneers preview and predictions.

The latest Cowboys vs Buccaneers odds for their playoff matchup come via BetMGM. Neither team is currently dealing with any significant injuries that could swing the line, so we don’t anticipate it moving much before kickoff. 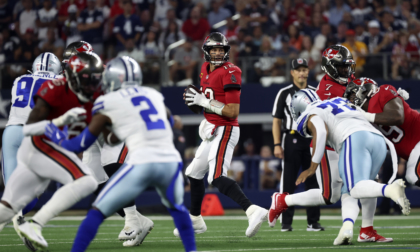 Cowboys vs Buccaneers game info: When is the Cowboys Bucs game?

The Cowboys vs Buccaneers playoff matchup will be on Monday Night Football, wrapping up NFL Wild Card Weekend with ‘America’s Team’ and the greatest player in NFL history sharing the stage. 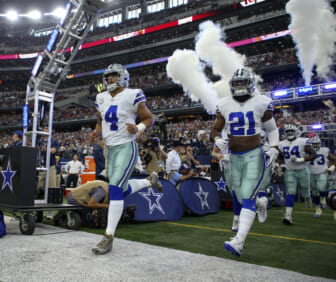 Everyone rightfully wants to talk about how dangerous Brady is in the playoffs and its deserved given he holds every postseason passing record. With that said, it’s also unfair to pretend like this 45-year-old quarterback is still playing at an elite level.

Brady’s 90.7 QB rating in the regular season is his lowest mark since 2019, his final season with the New England Patriots. He also posted the second-lowest yards per attempt (6.4) in his career as a starter with his lowest PFF grade (79.7) since 2013.

The Buccaneers’ offensive line was certainly a big part of the problem, but Brady really struggled with defenders near his face. Once a maestro at avoiding pass rushers, the seven-time Super Bowl champion has looked rattled at times this season. Of greater concern are his struggles vs pressure.

Brady’s alarming splits are absolutely something that Dallas can exploit. However, we’ve seen the Cowboys’ pass rush really take a step back as of late. After averaging 4.2 sacks per game (42 total) in the first 10 games, Dan Quinn’s group averaged just 1.7 sacks per game (12 total) in its final seven contests.

It’s something All-Pro edge rusher Micah Parsons believes he has an answer for. While there seemed to be some improvement in the final two regular-season games, we can’t really take that into consideration based on the quarterbacks faced (Josh Dobbs and Sam Howell).

“Ball is coming out way faster, there’s not a lot of dropback, more play-action. There’s a lot more quick-game against us. We’ve got to expect that and change our game plan.

Brady will get the football out quickly, limiting the window for the Cowboys’ pass rush to make him uncomfortable in the pocket. Tampa Bay finished with the seventh-highest rate (48.4%) of short throws (0-9 yards) during the regular season, further highlighting what Brady will try and do. Ultimately, this could be one of the biggest keys to the game for both teams.

Once one of the best pass defenses in the NFL, Tampa Bay has fallen on hard times. It held Dallas to 173 passing yards and 4.7 yards per attempt in Week 1. The Buccaneers’ secondary even held opponents to a 77.6 QB rating with a 7-6 TD-INT rate in its first five games. It’s been downhill ever since, especially as of late.

However, the 6-foot-1 cornerback played far better football in the first half of the season. Quarterbacks are taking more chances against him now and the results are troubling for Tampa.

Carlton Davis (49 receptions, 625 receiving yards allowed) has also been a big part of the problem for the Buccaneers. While he only surrendered 25 receiving yards on eight targets in Week 1 vs Dallas, he’s played inconsistently in coverage ever since. 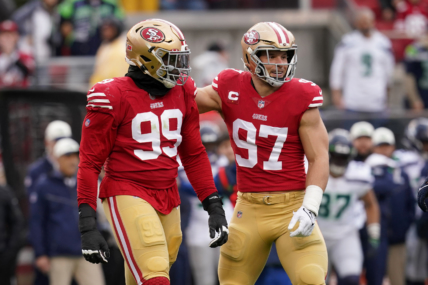 This is where Dallas can win on Monday. CeeDee Lamb is playing like an elite No. 1 receiver as of late and he is moved all over the field (535 snaps in slot, 469 outside). Meanwhile, Michael Gallup is now more than a year removed from his torn ACL and Cowboys’ quarterbacks have a 110.8 QB rating when targeting T.Y. Hilton (10 targets).

If Tampa Bay’s defensive backs don’t return to the level we saw in Week 1, there’s a realistic chance Cowboys vs Buccaneers is decided by this offense. Of course, winning one-on-one matchups still requires the quarterback to make accurate throws.

Dak Prescott has become a high-variance quarterback as of late. At his peak moments, the Cowboys’ star looks like one of the best players in the NFL with throws that only his peers in the MVP race can make. Then, there are the interceptions and off-target throws that fuel those calling for Cooper Rush.

One of the most alarming issues for him right now is how he performs when facing pressure from a pass rush. In Weeks 7-11, Prescott posted a 90.5 QB rating with a 55.3% completion rate vs pressure. Let’s compare that to his more recent stretch.

Tampa Bay’s pass rush isn’t nearly as dominant as the unit we’ve seen the previous two seasons. Ir ranks 15th in pressure rate (21.3%) and 22nd in hurry rate (5.9%). However, Todd Bowles likes blitzing and Prescott’s weakness this season is something the Buccaneers’ defensive-minded coach might be able to attack.

There’s also another kind of pressure. In three career playoff games, Prescott is 1-3 with three interceptions and an 87.9 QB rating. If Dallas suffers another first-round exit, its third with Prescott at quarterback, he’ll enter Tony Romo territory (2-4 in playoffs). How pressure handles pressure, both mental and physical, will define him on Monday night.

If Dallas returns to the dominant style of football we saw against teams like the Minnesota Vikings, it can win on Monday by two scores. However, Prescott’s sudden volatility combined with the Cowboys’ defensive regression puts them at risk for another loss in the Wild Card round. However, Dallas is simply the better football team and Brady hasn’t played well enough this year to prove he can single-handedly carry Tampa Bay to victory.